Thomas Thévenoud had an impossible job — he was the member of the Assemblée Nationale in charge of finding an agreement between urban transportation startups and taxi unions in France. He just announced his report to those companies, and it will become a law in the coming weeks. But some of the 30 points are highly controversial. For example, Uber, Chauffeur-Privé, LeCab and others won’t be able to display relevant geolocation data on your phone in France.

“I want to ban the apps that let you see if there are cars around you,” Thévenoud told the AFP.

“The report is quite explosive. He has locked the use of geolocation for the urban transportation companies and is proposing to allow it only for the taxis,” SnapCar co-founder Dave Ashton told me in a phone interview. “From a technical standpoint, it’s pretty incredible because we invented the use of geolocation for the drivers and clients. It’s completely ridiculous.”

Every taxi driver will also need to have a credit card machine. This will make it much more difficult for cab drivers to avoid paying taxes on their rides. When you order a cab to go to the airport, it will be a fixed price like in New York and many other cities.

Thévenoud wants taxi drivers to systematically use geolocation. In short, the French government is taking Uber’s innovation and giving it exclusively to taxi drivers. The government could also ban ride-sharing services, such as UberPOP, Heetch and Djump.

Taxi drivers asked for much more aggressive rules against urban transportation companies. According to them, in order to protect taxis, LeCab, Uber and others should have to wait at least 30 minutes before letting a customer in the car, and a ride should cost at least $80 (€60). None of that is in Thévenoud’s report.

As a reminder, cab drivers have complained against urban transportation startups for months. They claim that allowing these new companies is unfair competition.

In December, the government announced and immediately passed the 15-minute law for Uber, Chauffeur-Privé and others. Drivers had to wait 15 minutes between the time a customer hailed them and they let them in the car. Most startups didn’t even try to comply with the rule, and it was recently suspended by the Conseil d’État. In other words, it was too harsh.

Yet, taxi driver unions said that they would regularly go on strike to protest that decision. That’s why Thévenoud was appointed to find a “fair and durable solution that will benefit everyone while taking into account the different needs in terms of urban transportation.”

In the meantime, the government has stopped issuing new driver licenses for urban transportation companies. These licenses should become more expensive in the near future as well.

In other European countries, Uber is also facing pressure from the various European governments. For example, in Belgium, Uber’s traditional black car service was already banned. But the country also recently banned UberPOP.

In Berlin, Uber was just banned, but the ruling is not enforced yet. According to the government, Uber is operating a rental car business and shouldn’t compete with taxis. But you can still find Uber cars in Berlin, because the government fears that it will have to compensate the company for lost earnings.

Update: A tipster sent me the relevant part of the report regarding geolocation. Thévenoud said that urban transportation companies shouldn’t display a map with drivers around you. In other words, you will only be able to order a car, but you won’t know whether the car is 5 minutes away or 20 minutes away.

Thévenoud just said that the choice is clear as well. Taxi drivers can either accept this deal or the government won’t do anything to regulate urban transportation companies — in his own words, “if you strike, I will enact none of my propositions.” 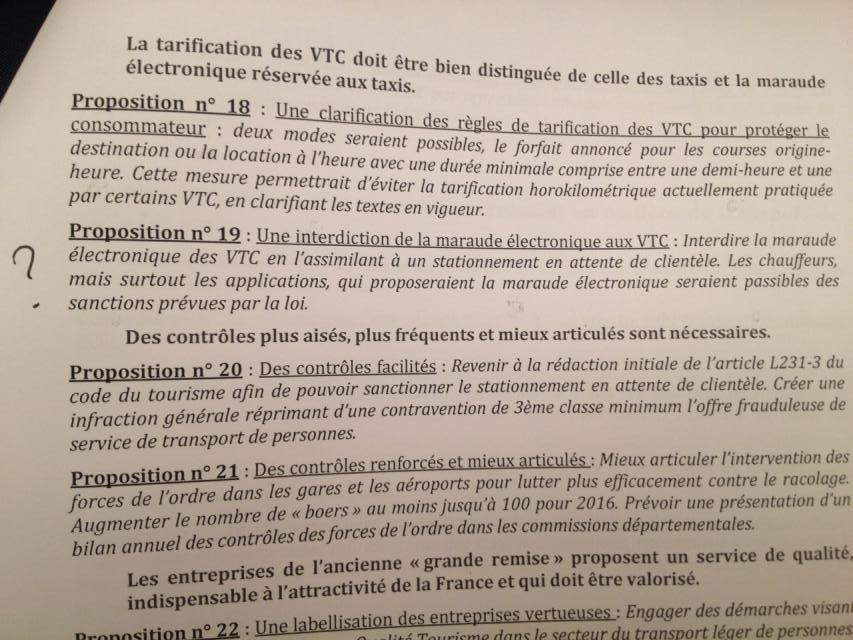 Photo credit: Maxime Bonzi under the CC BY 2.0 license