Andreessen Horowitz-backed AgLocal, which began as a marketplace for meat, connecting animal farmers to buyers including top-rated chefs, has now pivoted to become a consumer-facing service. On the new e-commerce site, online shoppers can browse through the meat products offered by family-operated farms, which are paid for on a subscription basis.

The company is also announcing an additional $1.3 million in outside funding in a round led by Chicago Ventures, with participation from Sam Yagan (Match.com CEO), Bob Trahan (early Facebook engineer) and all other prior investors.

There are two pricing tiers to choose from in the newly launched service, at least for now: an $85 monthly subscription offering 6 lbs of meat, and a $150 subscription offering 12 lbs. The boxes themselves are curated by theme, including a “Family Style” box (cuts for the home kitchen), “Grill Master” (for BBQ’ing), “Fit and Lean,” (lean and vegetation fed cuts), and the “Farmer’s Pick” (offals and unusual cuts.)

Boxes will contain recipes and other details about the farms themselves, including how the animals were raised.

Going From Consumers To Businesses And Now Back Again

Founded in May 2011, AgLocal co-founder Naithan Jones was originally inspired to create the company not only because of green concerns related to large-scale mechanized farming and its impact on the environment, but also because of the potential for consumer empowerment. In fact, his original idea involved the consumer-focused approach which allowed everyday shoppers to buy directly from farms, but he ran into trouble scaling that business. So he turned to the “meat marketplace” concept instead.

“The problem is that the key learning that caused us to run away from consumers [with the early version of AgLocal] is that we didn’t understand the economics of the business until we actually drove trucks ourselves…until we actually had to take on these customers, and the credit issues, ourselves.”

It was a situation they were forced into, as it turned out, when their partnership with their distribution partner dissolved. Product disappeared. Deliveries were “missed.” (Apparently, the partner realized that AgLocal was cutting into their own bottom line). That’s when the team at AgLocal took things over for themselves.

“Can you imagine this agreement dissolving on a Friday, and by Monday we had 100 deliveries to go out? We had to quickly find a warehouse, quickly rent refrigerated vans, get all of our inventory from Manhattan to Brooklyn, and re-pack it,” Jones recalls. “And then, after we started servicing restaurants, we started learning. We had delayed that learning by having those guys run our meat around for us,” he says.

And what they realized then was that the economics, the cost of acquisitions, and all the metrics that commerce startups keep track of, “just sucked,” Jones admits. 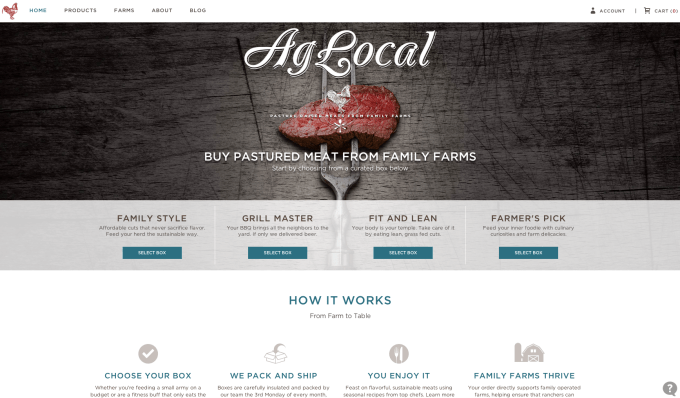 Meanwhile, consumer demand for AgLocal was high – thousands of consumers had signed up on the then B2B site, asking to be alerted to when AgLocal was available to them. Consumer behavior had also changed since AgLocal first attempted to go the consumer-facing route before – something which Jones credits other food-focused startups, like Blue Apron and Plated, for helping to affect.

Initially, the new AgLocal service, now running out of a San Francisco warehouse, will be available in the West, including California, Oregon, Washington, Nevada and Arizona, relying on less than a dozen regional farm sources, with plans to expand to the Midwest later in the year.

Subscriptions will be offered starting May 19th, but will be in limited supply, so AgLocal is opening up a pre-order window on Wednesday, April 23. 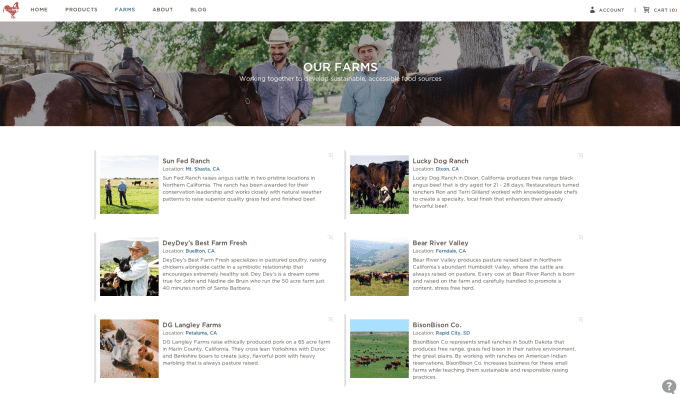 Longer-term, the goal is to provide a community service around the product, allowing consumers to ask the farms questions directly, and network with chefs who can help them prepare the meat.

“What we want to build is community around this, so when I subscribe to the service, I’m not just getting meat,” says Jones. “This isn’t Omaha Steaks…I’m connected to the farm, I feel like I’m a part of the community.”