Piqora, a marketing platform and analytics provider for “visual” social networks like Instagram, Pinterest and Tumblr, has raised $7.7 million in Series A funding, the company is announcing today. The round was led by DFJ, and saw participation from Freestyle Capital, Baseline Ventures, Lazerow Ventures, Firebolt Ventures and Altos Ventures.

Founded in 2012, and originally called Pinfluencer, as it was then focused on serving the needs of Pinterest marketers, Piqora has since expanded to serve the wider niche of social networking services it refers to as the “visual social web” – meaning those sites where users mainly post photographs and other images.

To date, Piqora has worked with over 300 customers, including Crate & Barrel, Steve Madden, Etsy, Wayfair, Z Gallerie, Sephora, Hautelook, Overstock.com and others, helping them track their pin-to-purchase funnels and ROI. It has also run over 600 Pinterest and Instagram photo contests, delivering over half a billion brand impressions. 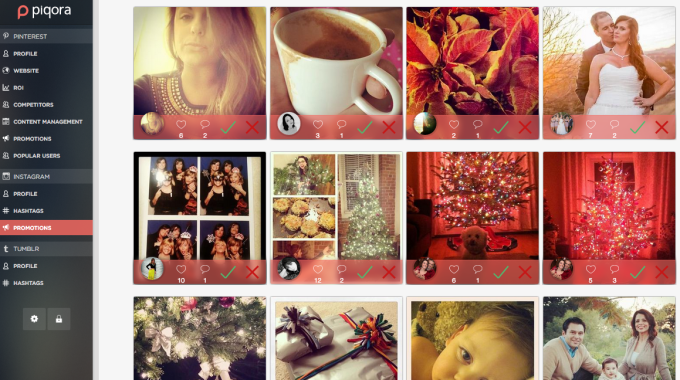 “We have a pretty robust image recognition engine that can help us identify product images across different networks, but we want to eventually be able to identify logos within images,” says CEO Sharad Verma. “There are a lot of images being published where there is no keyword or URL associated with an image,” he notes.

Alongside the investment news, Piqora is expanding its product with the launch of its “Instagram Conversation Manager.” This allows brands to engage with their Instagram followers via a web-based dashboard, similar to something like Hootsuite for Twitter.

This dashboard offers an aggregated feed containing comments and @mentions, allowing companies to track conversations across Instagram without having to log in and out of accounts. Customers already using the service, which began private beta testing around six weeks ago, include West Elm, Zales, JustFab and Benefit Cosmetics.

More Networks To Come In Future

With the new funding, Piqora plans to double its now 23-person team over the next 12 months, and expand to new offices across the U.S. It already has a few people in Austin, and plans to open offices in Chicago and New York in the coming year.

It also plans to expand to other networks including Twitter, WeHeartIt as well as those focused on specific verticals, like fashion or home (e.g. Polyvore, Houzz).

While Verma declined to discuss specifics around revenue, he would say that Piqora’s revenue is now in the “single digit millions,” monthly recurring revenue is up 700%, and its customer base doubled in the last year. The company has already also grown from just 12 people in January to the 23 it has now. And the round, says Verma, was over-subscribed.

“The reason why we saw so much interest from the investor community in this round is that this feels like where Marketo was seven years back,” he explains. “The visual economy is leading to a new category of enterprise marketing – that is, visual marketing automation.”