That adds up to a lot of cash. The Wall Street Journal published a graph of lobbying spend by several tech companies: 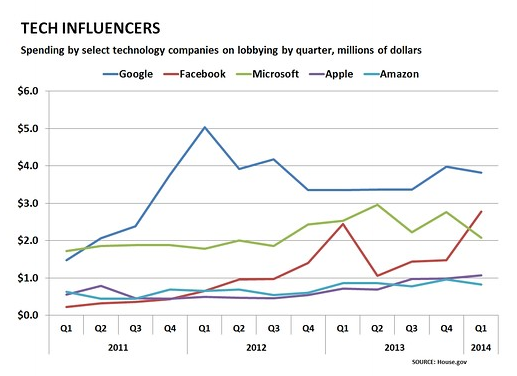 Why did Facebook spend so much in the quarter? Stock-based compensation costs. So Facebook’s non-GAAP lobbying spend would look a bit flatter. You can thank me later for that joke.

What are they spending the cash on? Verizon, for example, lobbied on the Cyber Intelligence Sharing and Protection Act, the Cybersecurity and American Cyber Competitiveness Act, and so forth. The list is long for each firm.

As immigration reform, privacy rights, net neutrality, and the NSA remain thorny issues, expect spending to stay high. Comcast, for one, has contracts with 35 separate lobbying shops. Can you guess why?

IMAGE BY FLICKR USER Andrew Malone UNDER CC BY 2.0 LICENSE (IMAGE HAS BEEN CROPPED)