It was either move to Silicon Valley or bust, according to Nitro CEO Sam Chandler. His startup base of Melbourne, Australia, didn’t have the resources back in 2008 to help him scale his cloud-based, document-collaboration startup beyond an angel round of investing. It’s still a common dilemma for entrepreneurs throughout the world.

Silicon Valley holds an amazing amount of skilled workers, knowledge, a risk-taking culture and most of all, the capital many founders outside the U.S. need to move forward. “A lot of entrepreneurs, me included, come here to be at the tech center and benefit from the wealth,” says Chandler.

Nima Adelkhani runs PITME, a Middle East-focused accelerator in the heart of San Francisco’s Financial District. He flies in hopeful founders from Iran and Pakistan in search of better funding. But he says most need a reality check, “They have this idea that you show up to Silicon Valley and people just hand you money.”

His advice to every one of them is to focus on making the right relationships first. Even then, you kinda have to be here, or somewhere near San Francisco, to make that happen. 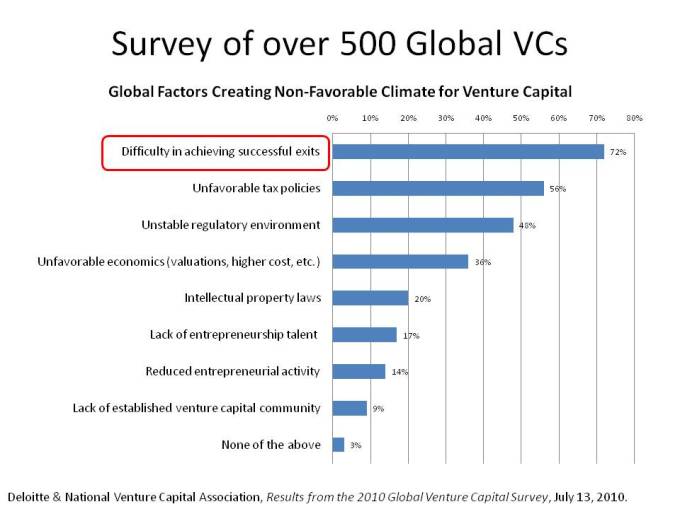 And founders who do come from here from outside the U.S. face other hurdles – San Francisco is expensive. Scarce housing, possible language barriers and lack of the right relationships with VCs stand in the way. Adelkhani only knows of a handful of the hundreds of Middle Easterners here who’ve actually found any funding so far.

“Look, it doesn’t happen here like they think,” Adelkhani says, adding that Middle Easterners need the education to build the right businesses over there. He says, his “Technology in a Tent” series attempts to do that.

Chandler will tell you we have a supportive infrastructure here that is missing in other parts of the world. Israel is one of the rare exceptions, with over 63 startups listed on the NASDAQ (more than Europe, China, Japan, Korea and India combined).

Add to that over 1,000 listed startups, accelerators and co-working spaces on the Mapped in Israel startup map and a bevy of investors and tech giants like Google and Microsoft paying close attention to the scene, making it one of the better contenders outside the U.S.

American venture firms are slowly starting to take risks on startups in Europe, as well. Sequoia Capital just made its first Series B investment for $19 million five months ago with productivity toolmaker 6Wunderkinder in Berlin. But there are still plenty of spots that are downright discouraging to startup investors.

France’s labor laws make it nearly impossible for a small business to even get off the ground, though both the public and private sectors are working to become more startup friendly over there.

According to Dow Jones VentureSource data, European companies raised $7.26 billion in venture capital last year. But even still, most of that money was highly concentrated in London and Berlin.

Many U.S. firms are hesitant to invest overseas or simply don’t think it makes sense for them. Chandler understands the thinking and says that feeds into a lot of the investment theory. “If you’re an unknown, that’s a big risk for [the VC]. They’d rather you be just down the road, close by.”

VentureSource data shows the U.S. accounted for over 70 percent of all venture-backed investments last year, giving further credit to those who say there is no such thing as another Silicon Valley.

Chandler was one of the lucky few able to figure out a way to make a profit after landing in the U.S., rather than giving a big chunk of Nitro to investors. And, ironically, Nitro took funding from Australian VC firm Starfish Ventures a year and a half ago.

But he says VCs are still mostly tapped out Down Under. “Right now there really aren’t any Aussie VC’s who are doing later-stage investing. There is a great early-stage ecosystem, but if your startup is more mature, you probably need to look outside Australia.”

Both Chandler and Adelkhani hope to make some progress in their respective countries.

Back when Chandler made the decision to come to Silicon Valley, he says the Melbourne startup scene was practically non-existent. He now cites Aussie-based companies like Atlassian, with $60 million in funding from American VCs and talk of an American IPO as success stories.

Chandler’s also been approached by the Australian Communications Minister to start some sort of dialogue on how to create a better system and keep the talent there. If they don’t, Chandler warns in a recent Sydney Morning Herald op-ed, “when startups become grownups, they’ll leave.”