Social logins are a convenient way to sign in to services without having to go through lengthy sign-up procedures and setting up yet another password. According to the latest data from social login service Gigya, Facebook remains the absolute market leader here and now powers more than 51 percent of all social logins in North America. Google+ is the second most popular service, but at 31 percent in North America, it remains far behind Facebook. 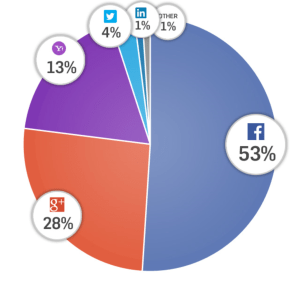 The third most popular service in North America is Yahoo with 15 percent, but it’s actually losing share in every vertical tracked by the service while Facebook is dominant across platforms and verticals.

Twitter, it’s worth noting, is a very minor player in the social login world. Both on the desktop and on mobile, it accounts for about 4 percent of social logins through Gigya’s services.

The one area where Google has made significant inroads is media, where it powers 32 percent of logins, but even there, Facebook gained 2 percent compared to Q4 2013.

On Mobile, Facebook’s lead is even more pronounced. There, it powers 62 percent of logins, followed by Google+ with 26 percent and Twitter with 6 percent. Yahoo is a distant fourth at 4 percent.

Overall, the North American market mirrors Gigya’s worldwide stats, where in aggregate, Facebook leads with 53 percent, followed by Google at 28 percent and Yahoo at 13 percent. 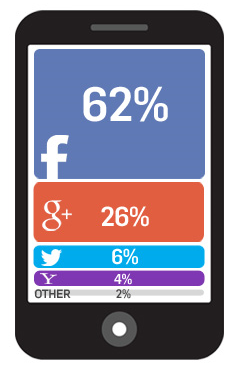 Outside of North America, Facebook’s lead is even more pronounced. In Europe, it powers 59 percent of social logins, while Google is at 19 percent and Russia’s VK powers 9 percent. In South America, Facebook now leads with an 80 percent market share compared to Google+’s 13 percent. The numbers in other regions are similar, with the exception of the Asia-Pacific market, where Google is far behind numerous local services, including QQ and Sina.