Sam Altman’s article this weekend exploring the topic of equity grants got me thinking about what startups offer new employees. While there are general notions in the industry about what equity to offer to folks at various stages of a startup’s lifecycle, there is little data available that shows how equity grants and compensation more generally compare across innovation regions. I was also interested in seeing if there was a difference in compensation between startups that allowed remote work, and those that did not. The difference turned out far larger than I expected.

Getting this data turned out to be pretty easy. These days, AngelList has become one of the most important talent clearinghouses in the startup ecosystem. The system has placed hundreds of engineers, designers and others into startups, and the website offers quite a wealth of data for analysis. I downloaded four HTML pages from AngelList on April 17 – the jobs pages for Silicon Valley, New York, Boston, and Remote Ok startups – and used Python’s Beautiful Soup library and some basic stats packages to analyze the pages (for those interested in doing more analysis, AngelList also offers a pretty comprehensive set of APIs).

Startups list their salary and equity range by role on AngelList, and the site also shows the number of applicants applying to each startup in the past week. To do this analysis, I simply averaged the salary and equity ranges together for each role, generating midpoints to compare across startups. Given the way compensation negotiations typically work, this seemed the simplest and fairest method.

First, let’s get a general sense of the startup labor economy in each of the three innovation centers. Boston is the smallest, with 125 startups looking for employees, and a total of 296 roles available. This compares to 537 startups seeking 1,318 roles in New York City, and 1,251 startups seeking 3,235 roles in Silicon Valley.

Proportionally, Boston’s labor market is about a fourth the size of New York’s, and one-tenth the size of Silicon Valley’s. As an observation, the number of startups that are hiring doesn’t seem to correlate well with the venture capital dollars flowing into these regions in the first quarter of 2014 based on MoneyTree’s report. Boston and New York had similar capital investments, even though their talent markets are quite differently sized.

Silicon Valley startups are willing to give out slightly more cash to employees, but are significantly more stingy when it comes to equity grants in the early days of the company. To do this analysis, I deleted a handful of clearly erroneous and outlier data points from the analysis (unless the bubble has finally arrived, I don’t think engineers at startups are making $135 million in salary these days!)

The average salary in Boston and New York were about even, at $85,300 and $84,300 respectively. Both were behind Silicon Valley, where the average posted salary was about $94,500. Interestingly, the top paid jobs in all three locations were for business and operations roles.

Altman wrote in his weekend post on equity grants that “As an extremely rough stab at actual numbers, I think a company ought to be giving at least 10% in total to the first 10 employees, 5% to the next 20, and 5% to the next 50. In practice, the optimal numbers may be much higher.” When we turn to equity, there is definitely a regional difference, as the following table shows:

In the early stages of a startup, Silicon Valley founders appear to be significantly more stingy than their East Coast counterparts, offering less equity than similarly-sized startups in Boston and New York. However, the tables turn in the growth stage of a company, when Silicon Valley begins to offer significantly more in equity on average than the other two innovation centers. Part of this can be explained through competition — once a startup has received funding, salaries are quite similar across the board, and so Silicon Valley startups have to compete more on equity grants.

There are several possible reasons for this: 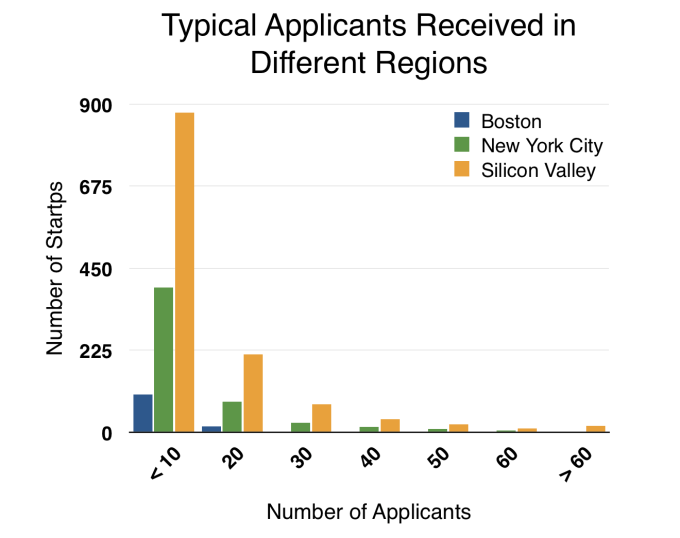 The general size of the talent pool is critical for the talent that startups receive, as the chart above shows. Five startups in Boston received more than 20 applications, compared to 61 startups in New York (where the top startup for applications was none other than AngelList itself with 61).

There are huge complaints from many engineers outside of the innovation power centers that companies are not willing to receive applications from non-locals. AngelList allows users to search for companies willing to accept remote work, and I also did a statistical analysis on these companies. There were 1,378 companies that were interested in remote workers.

One thing that immediately popped out at me was that the companies offering remote work are remote themselves. San Francisco represented about 200 of the 1,378 remote-seeking startups, with New York City coming in with 158 and Los Angeles at 75. Other major world cities like London, Toronto and Vancouver had significant presences, and altogether, there were more than 300 cities represented offering remote work on AngelList.

When we look at the average equity grant across the 2,113 remote roles available, there is a striking difference between different regions and remote startups in the early stage. Remote startups with fewer than 10 employees offered 2.7 percent equity on average, compared to 1.66 percent in Silicon Valley. Perhaps startups outside of the Valley have a harder time getting access to talent, and thus are willing to increase the incentives. Once startups hit growth, the equity grant at startups tends to coincide with the individual regions.

Ultimately, startups are competing in a labor market for talent. That talent has a lot of choices on where to go, and with platforms like AngelList, it is probably better informed about the market than at any time in history. One of the key ingredients that I read from this data is that Silicon Valley workers are more confident about their startups’ outcomes. Thus, employees are willing to accept smaller equity packages than at startups in remote cities where success appears harder to attain.

One other comment is worth making. Since websites like AngelList quickly propagate information across the industry, the compensation bands for startups are astonishingly similar these days. A direct recommendation from this observation for founders: do not be afraid to try something different than other startups. Offer more salary, or more equity, or some other compensation that separates you in the market. Ultimately, you can’t build a company without great people, and those people are going to cost more than you probably want. It’ll be worth it in the end if you’re successful, or it won’t matter if you’re not.