Mapbox, the OpenStreetMap-based mapping platform that lets app developers incorporate maps into any app, is adding another feature to better compete against the likes of Google Maps, ESRI and Nokia Maps: Smart Directions, a navigation service that developers can customise with extra details such type of terrain, specific places of interest, and current traffic conditions.

Its first partner, getting announced today alongside Smart Directions, is Scoot, the electric vehicle-sharing startup live in San Francisco. It will offer Smart Directions-powered navigation in the Scoot app so that its users of its scooters can avoid the hilliest routes around the city, starting Tuesday.

Mapbox has not yet revealed how Smart Directions will be priced, but the idea is to continue to wrap more premium features into the Mapbox platform (a plan that has been in the works for a while). Currently, the wider product is offered as a freemium service, with a basic tier at no charge and more enhanced plans beginning at $5 per month and increasing up to $499/month, depending on the amount of map views, geographic features and storage use for the cloud-based product.

Smart Directions is Mapbox’s first additional feature on top of its main map service, and CEO Eric Gundersen tells me that it will not be the last.

“We are like Lego,” he told me in an interview. “We put out tools to let developers create their own worlds.”

Off the back of a $10 million funding round announced in October 2013, Gundersen says the goal of future features will be to get “maps to start becoming more responsive… and go beyond baked-in customisation to using sensors to start influencing maps in real time and using new rendering technology that wasn’t there before.”

For example, someone using a running app could see a route changed in response to the speed at which he or she is moving. “We’re as much a map as an API company, a true platform player,” he says.

Today, Mapbox counts some 3,000 developers linking into its APIs, including big names like Foursquare, Pinterest, Mozilla and Evernote, who use the Mapbox APIs to create maps that they can then customise with specific fonts and colors.

Gundersen would not say who else may be eyeing up Smart Directions, although you can see navigation integration could be useful.

(For example, think of a night out in an unfamiliar city, where you used the Foursquare app to plan where you drink and eat and later dance, and then have possible itineraries mapped out for you.) 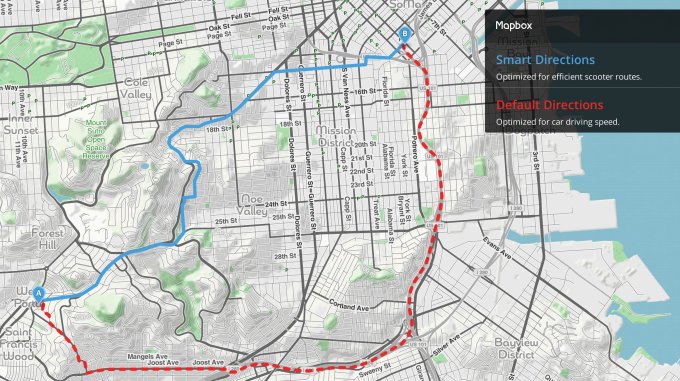 Gundersen says the hope is that Smart Directions opens Mapbox to new categories of developers such as those who make apps for connected cars and wearables.

Gundersen is easy with his praise for Google Maps, who he sees as Mapbox’s (much larger) main competitor, but also quick to highlight its shortcomings and the subsequent opportunity for his own company.

“Google has built amazing maps and routing,” he says, “but they are designing those for Google,” he says, referring to the very standard view you get of a Google map when it appears in a different app. “We think every app maker or map maker should have the same control of design as Google does. Think of us as a more customizable Google Maps.”

The bigger picture, widescale view is that Mapbox’s growth comes at a time when navigation and mapping remain moving targets.

Google snapped up Waze last year, apparently at the same time that others like Facebook and Apple were also eyeing up the company. Meanwhile, Apple still hasn’t found its mapping groove, and Facebook has yet to make a big mapping/location buy. Nokia, very soon to be liberated of its handset business, is putting a lot of eggs into its mapping basket. And there are companies like Dropbox, building out a mobile-friendly platform, which has left location conspicuously to one side for now.

No specific comment from Gundersen on where Mapbox — primarily bootstrapped from its founding in 2010 until last year — may fit into all of this. “In next couple of months we’ll be working with partners in the space,” he says. “We’re continuing to keep our heads down, building our platform.”