Netflix would prefer an ISP market with a number of large players, competing with each other on price, speed and availability. It is not in favor of Comcast swallowing Time Warner Cable, creating an even more powerful firm that could, in theory, extract increasing sums from itself.

The company was plain-spoken in its letter to investors:

Regarding Netflix’s assertion that Comcast was able to essentially force it to hand over money for a peering agreement, Comcast was almost derisive: 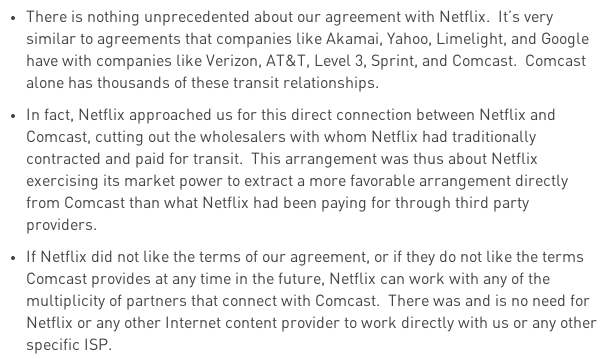 The first bullet point is difficult as comparing a company like Google to Netflix feels like a stretch, even though Google owns YouTube, a global platform for video content. The second bullet point indicates almost too patly that Netflix came to Comcast. It didn’t have much of a choice, given that its end-user experience for Comcast customers was deteriorating — it needed a deal to ensure that it could support its extant customer base.

I think that we can agree that Netflix would not have gone to and paid Comcast if it didn’t feel like it had to. This is also reflected in its complaint that we read previously. This undermines Comcast’s third bullet point, as it was therefore not the case that Netflix had no need to secure an arrangement with it, or could have worked with a separate party.

Comcast’s dismount is worth reading:

The difference between the two sides here is colored by money. Netflix recently called for “traditional” net neutrality — treating all content sent across an ISP’s network the same — as well as “strong” net neutrality, which would also prevent peering agreements that it recently signed with Comcast.

Confused? Netflix pays to ensure that its content can make it onto Comcast’s network and thus reach its own customers. In its view, this isn’t reasonable given that customers have already paid for its service, Netflix, and the bandwidth they consume under their Internet deal with Comcast. Comcast doesn’t like the deluge of consumer demand for Netflix that leads to its network becoming saturated with the stuff, so it wants to shift some of the costs to supporting that consumer demand to Netflix.

Is it fair for Comcast to bear the cost of supporting its own customers, or does Netflix retain some sort of fiduciary responsibility for its popularity among Comcast customers? We’re not done with this issue.

IMAGE BY FLICKR USER MARIT & TOOMAS HINNOSAAR UNDER CC BY 2.0 LICENSE (IMAGE HAS BEEN CROPPED)