Rising income inequality is quickly becoming the most prevalent issue of our century, “the defining challenge of our time,” according to President Obama. Nowhere is this more acute than in San Francisco, where rents growing at 3 times the national average are squeezing out the lower and middle classes in favor of tech workers who can pay astronomical housing prices.

This widening gap between the haves and the have-nots is leading to protests, and the tech industry, though not responsible for all these ills, has proved itself an easy target. Some protest groups like Heart of the City have targeted Google Buses and their routes, while the ominous-sounding Counterforce has gone the route of earmarking accessible members of the tech community in order to leverage these people’s media reach.

There is probably no tech employee more accessible than Google Ventures’ Kevin Rose, and thus the Counterforce found its hook, showing up to his house two Sundays ago with “Kevin Rose Parasite” banners. The group, which is starkly anti-tech, recorded the extremely awkward conversation on an Android phone (“we have no choice”), and leaked the full video to tech blog The Verge. This doesn’t exactly reinforce their credibility.

The entire banal exchange evokes the Upton Sinclair quote, “It is difficult to get a man to understand something when his salary depends on his not understanding it.” 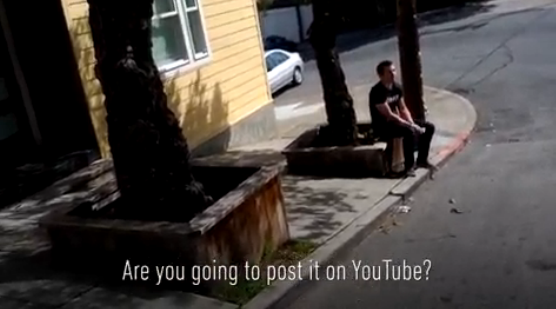