Target has significantly expanded its subscription-based e-commerce service, first launched last fall as a response to Amazon’s popular “Subscribe and Save” program, by increasing the number of online items available for subscription purchase from just 200 to now 1,500. While the company’s original focus was on baby-care items, the now revamped service offers similar savings for other everyday purchases, including cleaning supplies, health and beauty aids, pet treats and training pads, grocery items, home and offices supplies, and more.

The Minneapolis-headquartered retailer first debuted “Target Subscriptions” as a pilot program in September, with just 150 items related to baby-care, like diapers, wipes, training pants, and other regular purchases designed to appeal to new parents. Customers were able to order these items to be delivered in four, six, eight, ten and twelve-week installments, but unlike with competitor Amazon, there was not an additional savings for ordering on a subscription basis at the time of launch.

That has now changed.

Previously, customers were offered free shipping, and those paying with the Target card or Target VISA could save an additional 5 percent on purchases. Those programs remain in place today, but now the retailer is offering an additional 5 percent discount on all subscriptions orders. That means those paying with their Target cards could save a total of 10 percent on their orders while also not paying shipping.

In addition, some items have extra savings attached to them on a promotional basis – for instance, a special offer found on several items across the site (like this Tide detergent, e.g.) is promising a $10 gift card to those buying three items from the “Household” category. The move is likely meant to encourage users to sign up for regular shipments, which, over time, would be worth more to the company than the initial $10 loss. 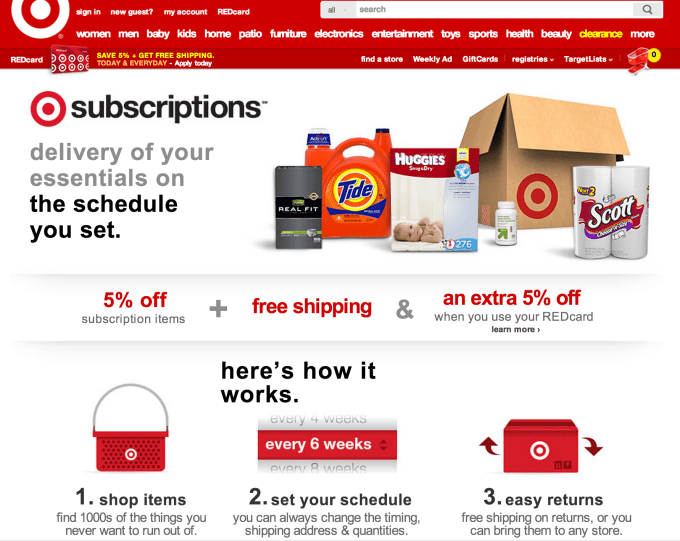 The company declined to break out its online sales figures, however.

Target also last fall introduced a pick-up program, similar to other online retailers including large competitor Wal-Mart, which allows shoppers to buy online and then pick-up at the store. That program began with 35,000 items and has since grown to 60,000, and now accounts for 10 percent of Target’s online business.