There is a reason it feels like everyone and anyone is raising money to build a company: They are. According to two studies, capital raised from venture capitalists by growing, private companies is at its highest point since 2001.

A study by MoneyTree pegs the total sum raised in the first quarter at $9.47 billion. By its number, that is the highest figure since the second quarter of 2001, when venture capital invested $11.5 billion. The year-ago quarter according to the study saw a more modest $6.01 billion of inflow.

A separate study by DJX VentureSource has a slightly different figure for the period, estimating total first quarter investment at $10.7 billion. It also estimates the comparative 2001 figure at $11.5 billion, however.

Regardless of which group has it more right, the trend is plain: Huge dollar amounts are up for grabs at the moment, as investors look to pour capital into companies of all stages while the NASDAQ is high, the IPO window is open, and cash-rich industry titans are more than willing to buy talent and products alike.

Bubble? It depends on who you ask, but I doubt anyone can say with a straight face that we’re living in financially conservative times. Cracks have appeared, with Square delaying its IPO, Box’s S-1 raising questions, and King’s offering struggling to find traction. But that hasn’t stopped others from going public and taking on new cash.

Signs of the times abound.

All that said, it’s important to keep scale in mind. Note the above stats indicate that we’ve reached mid-2001 levels of investment. That says nothing about how high investment was before, naturally. BusinessInsider, in a post aptly entitled “Venture Capital Funding Is Nowhere Near The Levels We Saw During The Dot-Com Bubble,” published the following chart [data is from the above-cited MoneyTree study]: 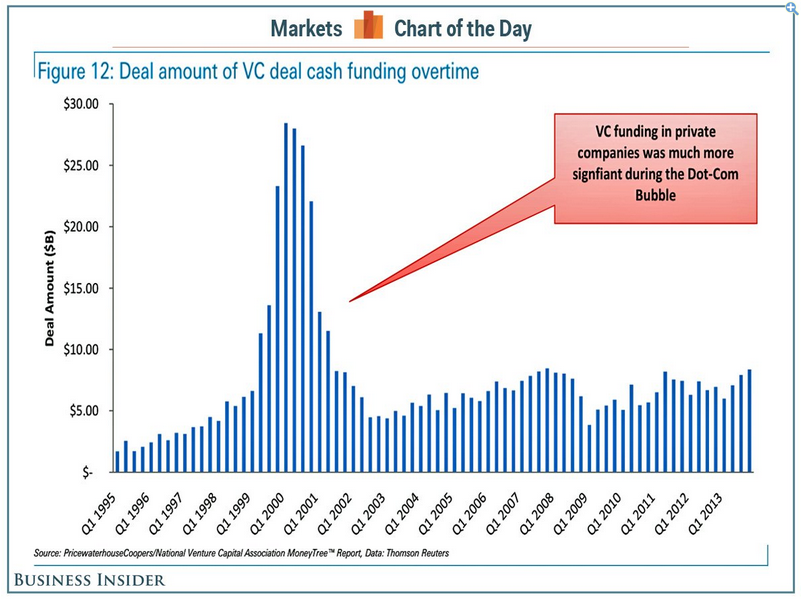 Venture capital investment is therefore at record levels when you compare backwards to any moment before the massive implosion of 2001, but remains dwarfed by prior excesses.

A few data points: Pre-2008 crash, venture investment topped out at $8.45 billion in the fourth quarter of 2007. It topped $28 billion in both the opening quarters of 2000. That’s a pace of around three times the investment we are seeing now, and funds are often going to larger, more established companies with nine-figure revenues.

The market is not in perfect balance, and there is quite a lot of stupid money bouncing around funding foolishness. But the total dollar figure for the first quarter of 2014, given how top-heavy it is toward mega deals for late-stage companies, likely isn’t a reason in and of itself to panic.

IMAGE BY FLICKR USER  Luz Bratcher UNDER CC BY 2.0 LICENSE (IMAGE HAS BEEN CROPPED)