By now may are familiar with the smartphone apps that track your movements via the accelerometer. There are multiple pedometers on all the apps stores for instance. But a more intriguing sector has emerged in the shape of apps like Human and Moves. Both not only track steps but give you feedback on reaching goals, in a very light-touch manner. The beauty of these apps is that they gradually ‘game’ you into moving more as a routine. Rather than having to set aside time to go to the gym, they encourage long walks or household chores as exercise.

Its an area most fitness apps have avoided, preferring to concentrate on tracking runs and cycling for instance. But clearly it’s piqued an interest. For today one of the biggest apps in that space, RunKeeper, releases a new iPhone app for what it calls “Life Tracking” called Breeze.

So, RunKeeper is clearly focused on working out, but they are pitching Breeze as an app which “covers the rest of the day, to help everyone move more.” Sounds a lot like Moves and Human doesn’t it.

But unlike the above, which show you how your day’s movement is going, when you open Breeze it gives you your past seven days’ worth of activity data. This is to paint a picture of what your daily steps and routine look like and help you work out a today’s movement goal.

The app also features always-on, in-the-background tracking, reminders on goals, recaps of your progress (like summaries of the day before.

Breeze is initially available on the iPhone 5s only (and future models) that have the M7 co-processor. This is the chip which has given the iPhone the edge, as it is dedicated to tracking motion in a way that limits the drain on your battery.

In addition the Runkeeper people plan to achieve something which is new to me in this sector: to give you notifications about where you’re making “smart choices” for your health. What does this mean?

Well, co-founder and CEO Jason Jacobs says they plan to “help make people more aware of how much they are moving and in what patterns through the day, then surface the right messages at the right times (personalized, based on what we know about them) to help make people aware of their patterns then make small tweaks to those patterns that add up over time.”

Although they can’t do this at launch, this does means that the next iteration the app will do this by using more data such as your calendar or the weather to help make our guidance/motivation more effective.

For example, if the app knows your next meeting is a two person meeting, it could suggest you take the meeting walking. “Or if it stops raining, we may prompt you that it is a good time to head out to get your lunch. Think Google Now, but in a movement/fitness-specific way,” says Jacobs.

Although this is the first version of Breeze, the Runkeeper people are planning a later integration between the Breeze and RunKeeper apps; more device support; more personalised guidance.

It looks like the race is on for the ‘movement app’ space. 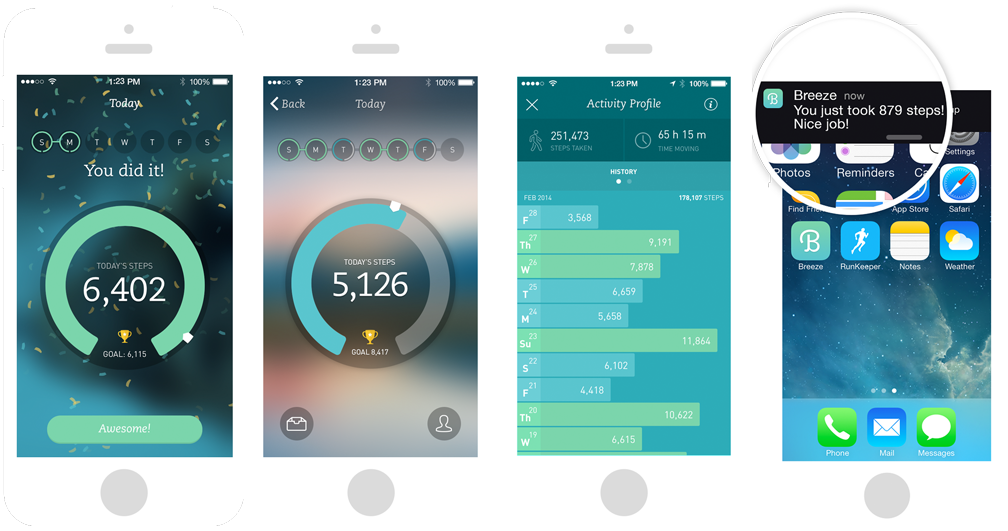