With its three-inch screen, the Rufus Cuff thumbs its nose at smartwatches with their tiny faces and dainty wristbands.

The wearable device, which bills itself as a “wrist communicator” and runs on Android, has access to the full Google Play store; a built-in mic, speaker, and camera; a full Web browser; accelerometer and gyroscope; touchscreen keyboard; and attaches to a switchable silicone band in five colors. Both iOS and Android devices can be controlled by the Rufus Cuff, which is now raising funds on Indiegogo, with a Bluetooth 4.0 connection.

Wait a second, you may be wondering. Why not just strap your smartphone to a wrist holder instead of buying another gadget?

Gabe Grifoni, the CEO and co-founder of Rufus Labs, says that as smartphones grow ever larger — at just four inches, the latest iPhone model is an exception — the Rufus Cuff’s goal is to eventually relegate mobile phones to “more of a hub device 50% of the time, like a home router that just pushes information out to a screen that could be used for full two-way communication without needing to pull out your phablet.” 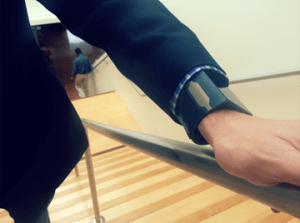 Unlike smartphones, the Rufus Cuff is designed to be used in landscape mode (making it easier to type on a small screen). Grifoni adds that even with a three-inch screen it is much thinner and less obtrusive than a smartphone strapped to a wrist holder.

“Making something that was big enough to work as needed but not oversized was the goal in designing a device specifically meant to be worn, glanced and used on the go,” he says.

The “design is very important to us and we think designing wearables for that specific intent is the way to go. It’s akin to saying why not just add a folio with a keyboard to your iPad and not use a laptop. I think some people do that but for me I find specific purposes for both of those devices in my life.”

Rufus Labs eventually hopes to create an ecosystem of products that will allow the Rufus Cuff to replace your smartphone, keys, and wallet. For example, you could use it to control a door’s smart lock or connect it to online payment providers and loyalty cards.