The $19 billion WhatsApp acquisition by Facebook is nothing if not a signal of the significant importance that messaging has in this new phase of online connectivity, in the world where people’s “first computers” are their mobile handsets. Dozens of new messaging apps launch every day, each with a core set of functionality and a few tricks of their own, ranging from the practical (calendar integration, e.g.) to the offbeat (sharing winking selfies) to the ephemeral (disappearing messages) and more.

But in the meantime, the two companies who are positioned to easily dominate the messaging wars by nature of offering the default application for SMS and MMS communications on their respective operating systems and hardware, Apple and Google, are falling further behind in terms of the feature sets today’s mobile users demand.

Let’s start with Apple. There’s nothing inherently wrong with its iMessage platform, in terms of feature set. An alternative to SMS, you can share text, photos and videos with individuals or groups over cellular or Wi-Fi connections with other iOS or OS X users. In the case where the recipient doesn’t have iMessage, the app will seamlessly switch over to SMS as needed. You also have one-tap access to a contact’s information, or a button to start a phone call or FaceTime video chat from the iMessage interface. 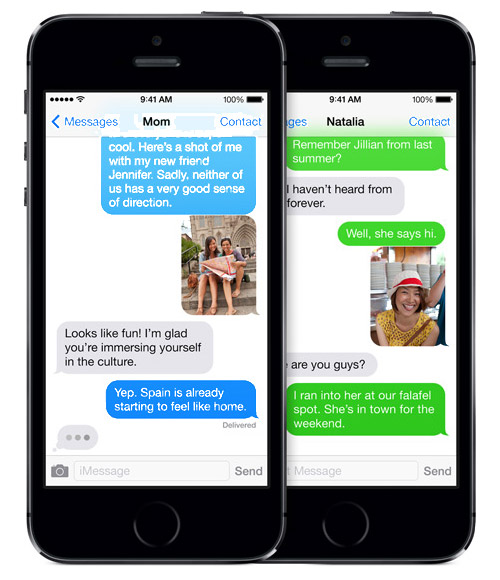 Most of today’s complaints about the service tend to are about the platform as a whole. That unplugging a phone number from iMessage after switching to another handset – like an Android phone – doesn’t stop iMessages from arriving unless you first deactivate the service on your iPhone, for example. Or that iOS software bugs can disrupt the whole thing from functioning at times. Or that doesn’t always play well with Android users in group chats. That sort of thing.

But though iMessage is fine, it’s no longer ground-breaking. When the service launched on iOS 5 in 2011, it was in many ways, Apple thumbing its nose at mobile carriers – sort of like the iPhone itself was. You guys own messaging now, but watch out: we’ll do it better!

So now, a sea of mobile messaging applications are building one-off experiences with feature sets that mobile users may have been lacking, or didn’t even know they wanted, until such an app was introduced. Look at Snapchat, for example – the company tapped into the unmet needs of a generation who grew up texting, and the evils associated with the permanence of their web-connected socializing and communications. Snapchats disappear, and that alone was a good enough feature to grow the business into a company with a multi-billion dollar valuation (give or take a billion).

Other companies vie for the privacy-minded user as well, understanding that iMessage and the like fall far short when it comes to securing private communications, whether for personal or for business purposes. Countdown timers and disappearing content, though popularized by Snapchat, are now standard across dozens upon dozens of apps.

Elsewhere, there are examples of apps that are trying to bring different types of content into the messaging experience, whether that’s sharing photos, recorded videos, songs, a map location, and more. These are things you can do from Apple’s own apps (Camera Roll, iMovie, iTunes, etc.) but the only “button” in iMessage for sharing content is the Camera button, letting you snap a photo or video, or share from a gallery.  In the case of a company that earns revenue from those who buy songs, TV shows, movies and music, the option for more extensive sharing options is a missed opportunity.

Then there’s the fact that, as default app tied to the core OS, iMessage is well-positioned for interoperability with other default applications, like mail, calendaring or even Siri. Why shouldn’t you easily take an iMessage to an email conversation, turn meeting requests sent via SMS into calendar appointments, or ask Siri to schedule iMessages to be sent out at a given time and more?

Though some messaging apps are solving the technological hurdles when it comes to interoperability, or sharing different kinds of content, they are still challenged in terms of growing a strong user base. If your contacts and friends aren’t using the app, then no matter what innovations they develop, they’ll fall short from being practical and useful additions to your everyday communications workflow.

Then there’s Google. While the company has the right idea – it’s time for messaging to evolve – its newer SMS replacement app Hangouts falls short in terms of implementation. 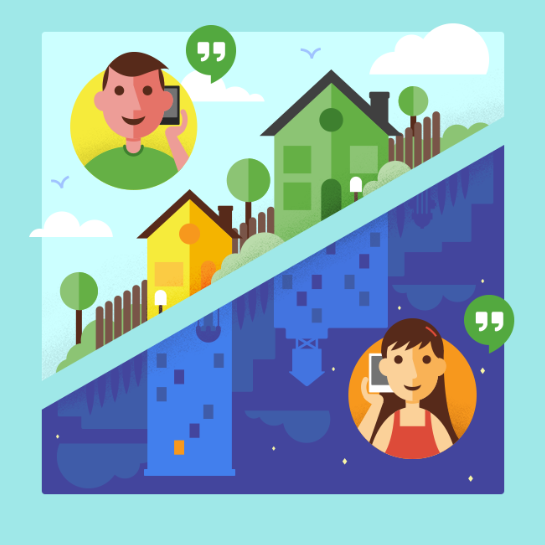 Google Hangouts on paper sounds superior to iMessage in many ways. In addition to offering SMS, MMS and group chats, plus the usual photo sharing functionality, it also offers clever features like the ability to share animated GIFs and, of course, “Hangouts,” Google’s video calling feature that can support up to 10 friends.

Unfortunately, where Google falls short is the way Hangouts works. Users have complained it’s bloated and slow. That it takes too long to load, and is overly complex. That it’s more focused on connecting you to Google+ and putting you into Hangouts, than it is on letting perform the simple task of texting a friend.

Google has also confused the issue by having too many messaging and communications products on the market at the same time. For example, while Hangouts was introduced as the successor to Google Talk and Messenger, it also overlapped with them for a time. And now, it’s poised to kill Google Voice, too. And while it makes sense to transition Google users to a unified service, there’s concern that Google Voice features like selective blocking, ringing multiple phones, or voicemail transcriptions won’t make the cut – offering Google users yet another reason for users to go in search of third-party alternatives.

Naturally, smaller startups have the ability to innovate on feature sets much more quickly than their platform giant counterparts, Apple and Google, can.

This is one reason, in addition to cross-platform support, and basic features like voice messaging, location-sharing, and stickers, why WhatsApp and other messaging competitors have been able to eat away messaging usage share. (Default apps are pre-installed, so you can’t count “downloads” in those cases. Hangouts, however, is not the default texting app across Android, but it is in newer versions. In the meantime, you can see that Hangouts has somewhere between 100 million and 500 million downloads according to Google Play, and iMessage was recently reported to see “several billion” iMessages per day, vs. WhatsApp’s now record high of 64 billion.)

But at some point, the platform maker itself should survey the market and determine what overall shifts it’s failing to respond to, and make the necessary changes to its core features in order to better serve its users.

Apple did that, for example, with introduction of FaceTime video chat, and Google iterated on video chat with its 10-person group video chat. Google Hangouts also offers emoji and GIF options, which is on trend with millennials’ communication habits, especially. And Apple has previously borrowed from startups for innovations in other apps updated for iOS 7, including its photo gallery and calendar.

Now is the time for both companies to take the pulse of the messaging landscape yet again, and fix their respective platforms to better serve their user base. Apple should consider stepping up in terms of feature set and deeper integrations, while Google needs to possibly step back from ever-more features and focus on basics: improving speed, stability and user interface.

And if they can’t get there on their own, then at least they have hundreds of flailing startups to choose from. Just check the app stores.