Internet activists are at it again. Following yesterday’s news regarding the appointment of Condoleezza Rice, former United States Secretary of State and National Security Advisor, to the board of cloud storage and syncing service Dropbox, a petition has sprung up online, demanding that users tell Dropbox they’re opposed to this move, and threaten to leave the service if Rice isn’t removed from the board.

The appointment was not met without controversy, of course, as Rice’s position in the Bush administration saw her commenting on Saddam Hussein’s alleged weapons of mass destruction, which played a role in the U.S. deciding to go to war with Iraq. However, even the petition’s writer admits that Rice is an “extremely brilliant and accomplished individual,” and “well-connected,” which is why a company like Dropbox would have welcomed her to its board.

Hosted at www.drop-dropbox.com, the petition references this and other offenses, including the administration’s use of controversial interrogation techniques, wiretapping, Rice serving on Chevron’s board, and more.

And then it demands:

Tell Drew Houston: unless you remove Condoleezza Rice from the Dropbox Board, I, and/or my organization, will stop using Dropbox and move to an alternative cloud storage provider 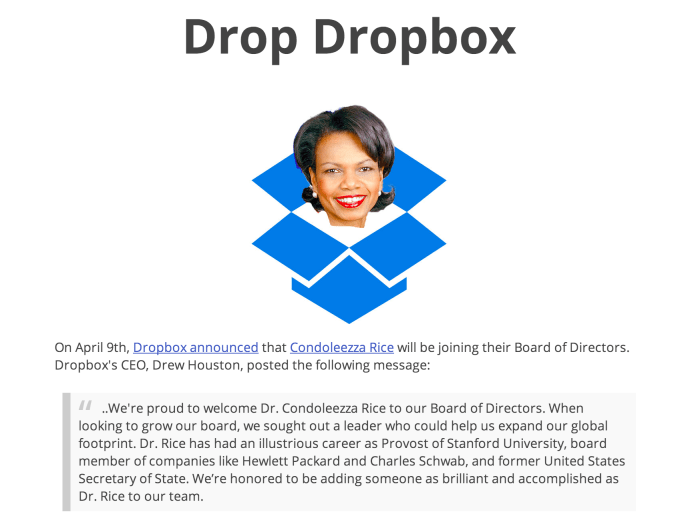 Users are prompted to post to Twitter or Facebook, using the #DropDropbox hashtag, which has, in fact, been used for other complaints against the cloud storage provider since as far back as 2011.

The site then lists several alternatives to choose from including Box, Microsoft’s OneDrive, SpiderOak, Google Drive, and more. (There’s some irony here, since companies like Google and Microsoft were among those PRISM revealed to be involved in the U.S. government’s surveillance of its citizens. To those who care deeply about the politics surrounding the technology they use, there may not a “good” choice here, just the lesser of two perceived evils.)

The petition is hosted on a domain whose registration has been shielded by Domains By Proxy, but some of the first tweets and references to the site are found here on Reddit and on this anonymous Twitter account called @TheAnonNation, suggesting an affiliation with the loosely organized internet activists Anonymous, though not one of its “official” accounts. (i.e. @YourAnonNews has not referenced the campaign at this point.)

However, the campaign has already started making its mark on Twitter, where a number of users have begun retweeting the #DropDropbox hashtag to @Dropbox and its founder Drew Houston. While the tag is not trending on Twitter at this point, roughly 300 tweets came in over the past 30 minutes, indicating some sort of viral pick-up and spread here.

In the case of Internet activism, it’s often a vocal minority that makes waves, calling attention to its cause, while a larger majority is either uncaring or oblivious to the issue at hand. Whether or not that’s the case this time around remains to be seen.

But online activists have had some successes with attacking companies for their politics as of late, having effectively lead the charge to oust Brendan Eich as Mozilla CEO for his financial support of proposed legislation that would have repealed gay marriage. While that was not an anonymously led campaign like this, the fact that it did enact change in such a short amount of time may have emboldened those behind Drop Dropbox to start their own social media-infused rallying cry, too.