Having a good wine and want to remember it later? A mobile app called Drync has proven handy in helping you do just that, by offering a simple way to “scan” the bottle in front of you in order to identify it, then mark it as a favorite so you can order it again or have it sent to your home. Now, the company has raised and additional $2.1 million in outside funding to continue building its social network and wine shopping platform. The service is also now available on iPad.

Launched in August 2013, Drync could have been just another wine discovery and categorization tool, but the service has done well – likely because so many of its competitors’ apps at the time were fairly awful. (Believe me, I tried a bunch before settling on Drync. It was fun testing. Of course, now many of the apps have been improved thanks to iOS 7, which means…well, my Fridays are looking up.)

Drync’s wine-scanning feature – basically, snapping a photo and letting the app match that label to its database of over 3 million wines – isn’t perfect, but the app’s overall functionality and design helped it win a top spot among the competition.

“Our big ‘aha’ in Q4 was that people are very willing to click ‘buy’ on their phone,” explains Rosen. “The combination of convenience, being able to find nearly any wine in the market, and great prices, seems to have hit a chord,” he adds. “We’ve got a fix on the unit economics and know we can scale this business.”

The additional funding will help Drync with customer acquisition and allow it to grow its team, Rosen says. One new hire has already been brought on board: COO Brian Carr joins Drync from Evernote competitor Springpad, where he helped the service acquire over 10 million users. Other hires will be in engineering and marketing, says Rosen. 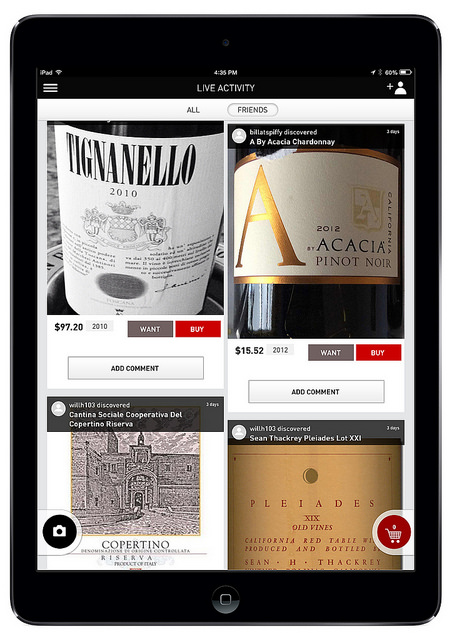 In terms of the product itself, Drync is rolling out two major updates today. One is a new social and recommendations feature involving a live activity feed populated with all current Drync activity from your Facebook and Twitter friends on the service.

In the future, the company plans to enhance this feature even further to improve your recommendations, making them more tailored to your own tastes and interests.

“We are thinking a lot about personalized wine discovery – surfacing wines we think you’ll love based on some point of relevance,” says Rosen. That is, recommendations based on your palette and what you’ve scanned, favorites from friends you trust, or suggestions from experts you deem worthy, he explains.

The other big news is that Drync is now available on the iPad, which offers the same feed, as well as curated lists of wines for browsing and discovery. All platforms – iPhone, iPad, Android and web – have also seen an improved shopping experience, with added stories and descriptions about the wine lists now available. On the larger tablet’s screen, however, the goal is to make Drync less of the mobile utility that it is today, and more of a tool for learning about wines and discovering those you’d like to buy.