Marvel, a UK startup founded last year by ex-employees of Enpocket (acquired by Nokia), is on a mission: to put creating a mobile app “prototype” within the reach of almost anybody.

The company’s first offering, built on top of Dropbox, lets you turn sketches, wireframes, and Photoshop files synced with the cloud-storage service into a tappable (or clickable) demo of how your mobile app will work. It does this by letting you add ‘hotspots’ and transitions to your images so that the resulting prototype can be navigated as if it were an actual app.

Now Marvel has applied this simple idea to an iPhone app of its own which lets you photograph paper sketches of your app idea and tun these into interactive prototypes too. 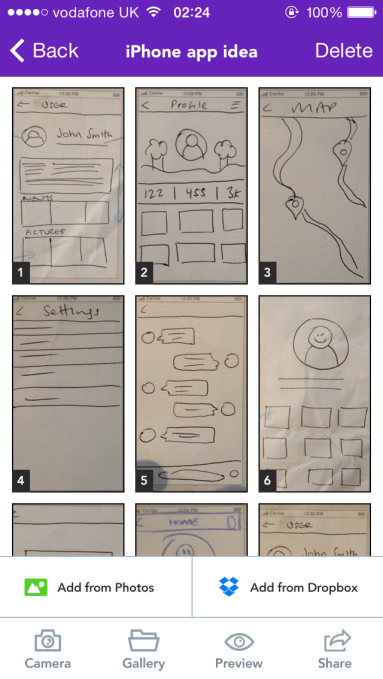 Aimed at designers, UX experts, product managers, students and businesses that need to quickly prototype ideas to share with clients and teams, Marvel’s iPhone app (and its original web-based offering) couldn’t really be any simpler.

To begin with you draw your app screens on paper, a whiteboard, or on the back of a napkin in true folklore style, and then use your iPhone to take a snap of each sketch, which can be designed for either iPhone or iPad.

Next, using the Marvel app, you apply ‘touch’ hotspots to each image and in turn link your screens together in the way you intend the app to be navigated.

Finally, once you’re happy with your prototype, you can share it via a unique mobile-friendly URL over email, SMS or Twitter. Meanwhile, your Marvel prototype is synced with Dropbox and linked to your Marvel account so that you can continue working on it at a future date.

In addition, any changes you make to your ‘screen’ images, even via another app such as Photoshop, are synced with Marvel due to being built on top of Dropbox. This also means the startup is able to offer its core service for free without limits since it isn’t providing cloud-storage.

“In the past, if you wanted to see your app or web designs and ideas in anything more engaging than PDFs and Powerpoints, you needed to have the skills and the time to code it into an interactive prototype. This often puts prototyping out of reach for many businesses and individuals as they simply don’t have the time, money or developer resources,” explains Marvel co-founder Murat Mutlu.

“What if you could create a prototyping tool that didn’t just help designers and businesses, but anyone with an idea, no matter what level of design and technical skill they had? Marvel was designed and built to do just that,” he adds. “We’ve designed Marvel to be ‘pick up and play’. No maze like interface and gunk you don’t need. The aim of Marvel is to create your prototype and just get out of the way so that you can concentrate on the important stuff.”

Along with Mutlu, the startups other co-founders are Brendan Moore, previously a Solutions Engineer at Nokia and Navteq, and Jonathan Siao, who also worked at Nokia. All three went full-time with Marvel after the company raised a £60k investment from Haatch in November.

Mutlu cites Invision as its main competitor in what is an increasingly crowded space (updated: AVOS-incubated Prototyping On Paper springs to mind). “They are extremely well funded, have a huge team and a 2.5 year head start. But there’s still an opportunity to take a different approach and do something bigger, more meaningful and with a better experience,” he says.

To that end, while Marvel is free to use, the startup plans to move to a freemium model with a “Pro” version offering additional features, such as team collaboration and further service integrations.