We take more photos than we know what to do with, and that crummy camera roll that came with your phone can’t handle them. That’s why Dropbox built Carousel for iOS and Android — to make managing your photos simple, just like it did with file storage. Lightning quick with automatic backup and an innovative chat feature, Carousel puts a lifetime of photos at your finger tips. Here’s our hands on look. 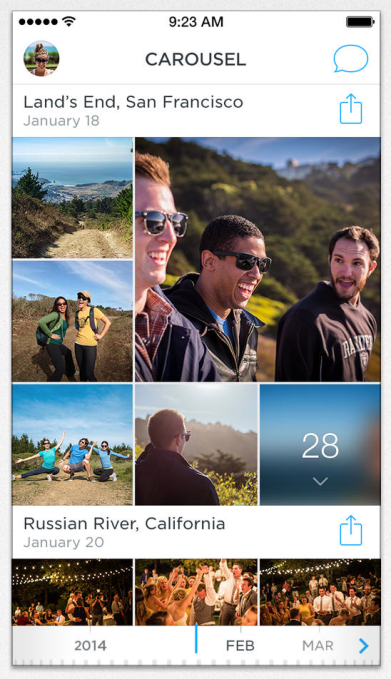 Launched today at Dropbox’s big press event, Carousel loads photos so fast it’s hard to believe it’s pulling them from the cloud. There’s only a tiny bit of blurring if you whip through months of photos, and most of the time it seems to perform just as well as iOS Camera Roll. The slideable horizontal navigation wheel at the bottom makescwc scrolling back to ancient photos and videos a snap…

…which make sense because the product was built by the Snapjoy photo app team Dropbox acquired in late 2012. At the time, Snapjoy was lauded for its

The killer use case for Carousel is sharing big volumes of photos and videos. Sure, it’s easy to text or email a friend a single shot. But 100 photos? 1000? Non-cloud solutions break down at this scale but Carousel handles them with ease. And taking a shot at Instagram Direct, Carousel’s messaging threads around shared photos make it a truly social app, not just some storage utility. 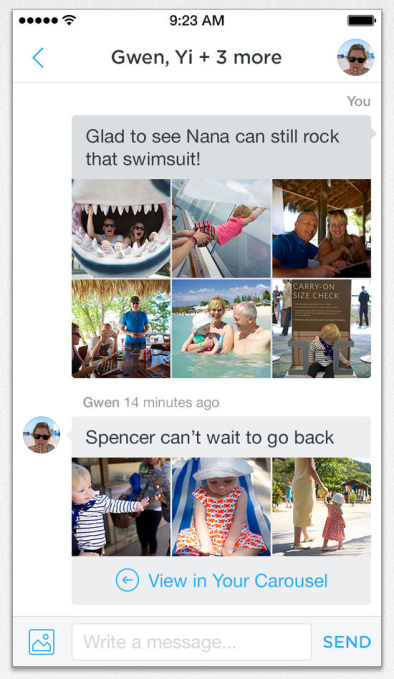 The main issue with Carousel is that for it to really shine, you need to have all your photos in Dropbox. And that will probably exceed your 2 gigabytes of free storage. In that sense, Carousel could actually be sneaky way to get more people paying for Dropbox. This isn’t a tangent for Dropbox, it’s a smart marketing strategy: provide bonus value for storing everything in Dropbox.

In the end, the camera roll is the last app built by your phone’s manufacturer or operating system-maker that’s still on most people’s homescreens. That makes it one the ripest areas for disruption and biggest opportunities to own one of those lucrative first homescreen slots. If Carousel can make photo management better while keeping it dead simple, many may be willing to give it a whirl.