Printic, the smartphone application that lets you order Polaroid-like photo prints with your own custom captions, is now expanding its product lineup to also include photo books. The books are similar in style to those from competitor Mosaic (owned by Mixbook), with a black linen hardcover and cut-out windows on the front, allowing you a sneak peek at some of the photos inside.

The Paris-based startup, founded by Benjamin Grelié, Florent Malbranche and Nicolas Reboud, has been steadily improving their Printic app in the months since its 2012 debut. It now offers boxes of “printics,” as it calls its mini-photos, as well as calendars, in addition to the new book.

Like the prints, the book also ships in an attractive orange box, which makes it feel more like a gift – as many photo book orders today are, of course. You can pick out 20 photos to be featured in its 24 pages, and then with an editor, you can tap and hold photos to rearrange the order, crop photos, or tap on a color picker to customize the pages’ background. Photos are printed on high-end glossy paper, and can include those not only from your Camera Roll or Gallery, but from social networks like Instagram and Facebook. 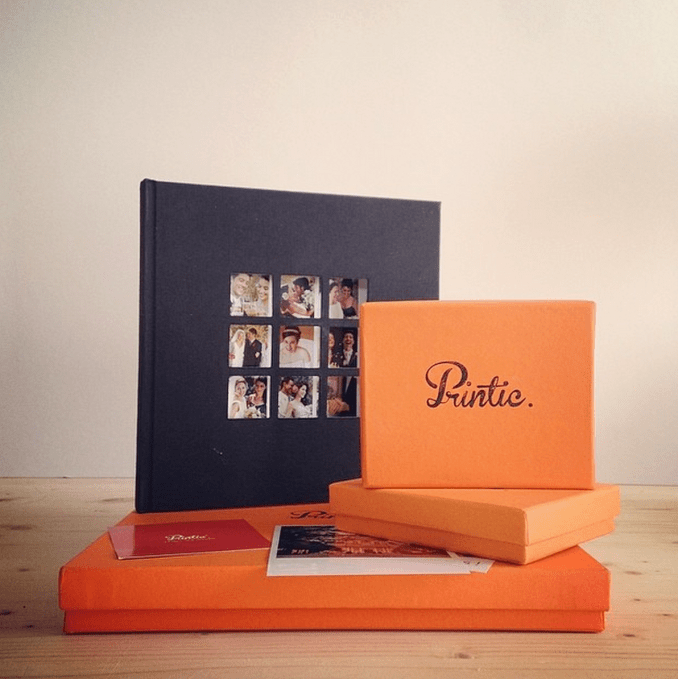 In the future, the company will consider offering additional themes, stickers and caption controls as options, if users demand them, but for now, explains co-founder Malbranche, the idea was to “create a simple tool and see how people react.”

While the book is, as noted above, reminiscent of those Mosaic sells today, but the customization options it offers now and in the future will be a differentiating factor. Mosaic’s larger vision is that people don’t have time to build out photo books, especially from mobile devices, so its service is more automated. In addition, adds Malbranche, “we also wanted to provide Europe and Asia with such a tool – we didn’t have any book making app so far,” he says. (Printic’s books are also available in North America.)

The company, whose app has been download just under a million times to date, is now growing at around 30% month-over-month, and is still bootstrapped for the time being as the company is profitable.