Facebook today offered reporters a deep dive on how it handles privacy and previewed some upcoming changes. The company revealed it does 80 trillion privacy checks per day on the backend to make sure data isn’t wrongly exposed. It runs 4000 surveys about privacy per day which pushed it to now begin displaying on-screen descriptions of how privacy controls work, including for status update audience selectors and resharing.

Facebook used to have every team work on its own privacy functionality, and then would have dedicated teams for privacy sprints around specific privacy changes. But as the company grew, two specific privacy teams evolved. One is the Privacy Product Engineering team that builds the settings that let users control who sees their content. The other is the Privacy Infrastructure Engineering team, which “helps engineers move the fast and build things” while still being confident there will be no privacy breaches, says Privacy Engineeering manager Reylene Yung.

For example, the product team built the privacy shortcuts into the home page and the selectors for choosing who sees your status updates. The infrastructure team built a framework that ensures if a piece of data is missing information about who it can be shown to, it’s locked down, which lets engineers be confident they can’t screw up Facebook in ways that will expose private information. 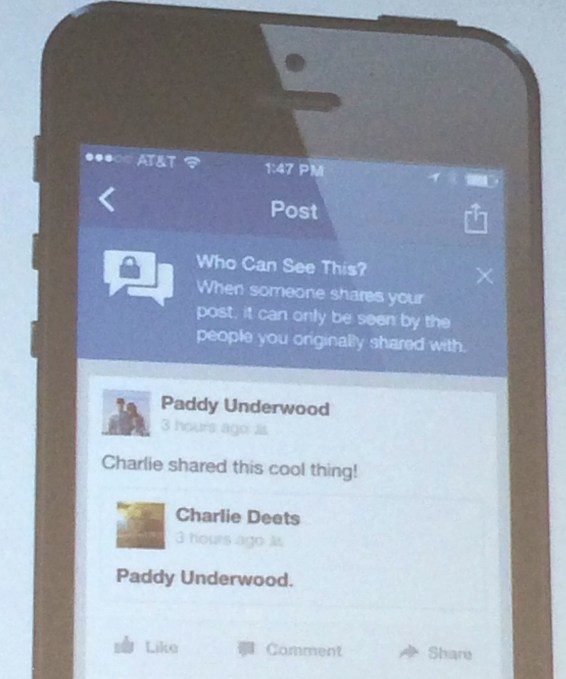 Facebook runs 4000 surveys a day in 27 languages about how people are reacting to privacy controls. To make those sentiments feel more urgent and personal, Facebook displays quotes from those surveys on monitors in its privacy teams’ offices. In the past those surveys have led directly to product changes. Yung explained that teenage users were repeatedly writing in asking for the ability to post publicly, as Facebook had barred that functionality to protect kids. But the feedback convinced it to give teens the option to post publicly in October 2013 and do a big outreach campaign about what that means.

More recently, the surveys identified some big misconceptions and product requests that Facebook is hoping to fix with new explanations product changes:

On the left, Facebook’s old web status update privacy selector that didn’t explain who “public” or “friends” posts would be shown to. On the right, a new design Facebook is testing that spells out who those audiences include

Facebook’s privacy team manager Mike Nowak admitted that people think Facebook changes its privacy controls too often or that the company has failed to make privacy easy to understand. That’s a bit of an understatement. Facebook has a terrible public perception when it comes to privacy that may be causing an overall chilling effect on sharing. People may choose not to post something because there’s a risk they don’t understand their own controls and could accidentally share it with the wrong people.

Designing privacy controls is a serious challenge. Some users want total control, even if it’s complex, while others want a super simple interface they don’t have to think about. Building controls that satisfy both has been a struggle for Facebook, which gets criticized for either making controls too complicated or not empowering users enough.

But that’s no excuse for not finding a solution. The company’s mission and business model depend on privacy. People are scared to share if they don’t know who will see their content, and the less that’s shared, the fewer opportunities Facebook has to display ads. Perhaps a one-size-fits-all approach simply can’t work. Facebook may need to create a dynamic privacy control system that recognizes if users want more granular control or simplicity and serves them an interface to match. For now, more sessions with reporters like this and more on-screen explanations should instill a bit more confidence.