Back in February, Jan Koum, CEO of Facebook-owned WhatsApp, hinted that the popular messaging company would soon be unveiling a new way of working with carriers, starting first in Germany. Today that deal is now live. E-Plus is now selling a prepaid SIM that gives users unlimited access to WhatsApp outside of their data plans.

This is a groundbreaking deal in two ways. The first is that it is the first time WhatsApp has partnered with a carrier to sell a SIM, complete with WhatsApp branding and free WhatsApp data usage, even without calling credit. As WhatsApp describes it, it effectively makes the messaging giant (now pushing half a billion users) an MVNO (a carrier that doesn’t own the actual network).

The second groundbreaking element is that, according to WhatsApp, it is the first time that a tech company has partnered with a carrier for an MVNO service:

“WhatsApp has over 50 carrier deals globally. The WhatsApp ePlus SIM card is WhatsApp’s first partnership with e-Plus (a carrier) to launch an MVNO brand,” explained Neeraj Arora, WhatsApp’s head of business development. “This is the first kind of its deal globally between a technology company and a carrier. Carriers are important strategic partners for WhatsApp and we’re constantly working with them to bring innovative offerings to users globally.”

For a basic €10 ($14), users get €10 of starter credit can can go towards domestic calls that cost 9 euro cents per minute or domestic SMS, or 24 euro cents per megabyte of data use. For an extra €10, users get 600 credits that can be used interchangeably for 1 megabyte of data, 1 minute of talk or 1 SMS (each costs 1 credit). Using the SIM, even without any credit left, gives a user access to all the WhatsApp messaging that they might want to use on data networks.

It doesn’t appear that taking the SIM lets you waive the $0.99 annual subscription fee for WhatsApp itself that users need to pay after the first year of service, however.

And it’s not clear whether WhatsApp voice services, which WhatsApp says are coming but have yet to launch in Germany, will come as part of the deal or whether they will be charged separately, and WhatsApp did not comment on this aspect of its plans.

As the German blog AndroidNext points out, WhatsApp is installed on some 90 percent of smartphones in the country already — working out to some 30 million users.

In other words, this potentially helps E-Plus pick up users off rival carriers, rather than introduce people to WhatsApp.

What it also does is give WhatsApp an opening to positioning themselves in a different way: for users, it’s now associated with being a carrier brand, not just a messaging app. That will be something WhatsApp could leverage more as it rolls out further telephony and other revenue generating services.

There is another reason it’s smart for WhatsApp to try this service out in Germany. Given that it is a “safe” market for WhatsApp (ironically a market that has been rather challenging for Facebook on the privacy front) it’s a good place for it to try out new things like this to see how well they do. As the company — and Facebook — move deeper into mobile telephony services like voice, seeing if they can get users to pay up for a “WhatsApp SIM” is a logical step.

On the other hand, the MVNO model has been notoriously difficult for companies to leverage with reasonable returns as the margins are very thin. It would likely depend on whether WhatsApp decides to replicate the model elsewhere, and how many users respond. Or whether there is a value for WhatsApp greater than simply gaining more dedicated users.

As for how it works, SIM top-ups, as well as top-ups for extra credits for the month, come via an interface that appears to be separate from WhatsApp itself but has been created with the same branding and styling as the app itself: 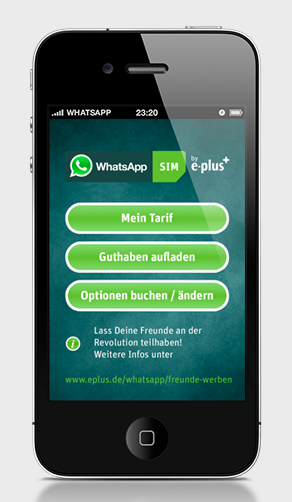 Longer term, E-Plus says that it will enable users to activate automatic top-ups. To promote the SIM, it’s also encouraging users to recommend other friends to use it; for every two friends who use your reference code, you get an extra €10 credit.

Updated with commentary from WhatsApp, additional clarification about the tariffs.