As some aspects of the tech industry continue to mature, others are putting efforts into ways of using tech to disrupt decidedly non-tech businesses. In one of the latest developments on this front, Vengo Labs, NYC-based makers of mini vending machines selling everything from chewing gum to mini speakers, which also doubles as an ad network, have raised $2 million in funding to expand their business to new markets.

The Series A round comes from a mix of new and existing investors, a list that includes a lot of well-known and well-connected (and strategic) names: Jens Molbak (founder of Coinstar), Brad Feld, Nas & Anthony Saleh’s QueensBridge Venture Partners, Joanne Wilson, Kensington Capital, Tony Hsieh’s Vegas Tech Fund, Scout Ventures and Vector Media. Some $720,000 of the financing was via SeedInvest, a crowdfunding platform that connects investors with startups.

It comes on top of a $1 million round raised by Vengo last year, when it was revealed as an ancillary project to another vending-style business called TaxiTreats, which itself has yet to launch.

Although vending machines may sound like an unlikely business for tech investors, in reality these big, glass-faced boxes have been in the mix for a while now. In the earliest days of mobile payments, people were experimenting with ways of using handsets to let people pay for sodas and chocolates from vending machines — a basic theme that picked up Twitter variations in later years, including most recently a machine that makes Tweet-customized Oreo cookies.

And of course companies like Coinstar have pointed the way ahead for those who are tackling age-old services and vending machines with new tech and new ways of thinking (playing on a theme highlighted by companies like Uber and Airbnb in car and hotel services; or Pebble with watches).

In that context, Vengo is taking the vending machine model another step further. 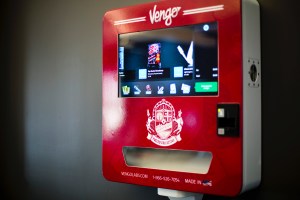 Not only is there a cut made from the sales of goods through the machine but also through the advertising that runs across the front of them. Brian Shimmerlik, who co-founded the company with Abuhena Azad and Steven Bofill, says that right now the startup’s revenues are “approximately 50/50” between these two streams, and that it is working on ways of connecting them closer together. “We’re focused on serving our brand partners as an interactive point-of-purchase digital media platform,” he says.

Shimmerlik says that the funding will be used to take the Vengo vending machines into new markets — and by that he means not just cities, but tackling new products like Bitcoin (Bitcoin ATM!) as well as other products.

Today there are about 60 Vengos already installed across NYC in places like NYU, ProHealth, Raven, Fueled Collective and the IPG Media Lab. Together these have clocked up 280,000 active consumer engagements per month.

That’s a metric that can then be applied directly to Vengo’s advertising business, where brands like Uber and Mondelez have placed promotions knowing that customers will be focused on their ad in a kind of Pavlovian moment of anticipation… at least for that brief wait between vending selection/payment and when the user gets his/her Sour Patch Kids, Trident gum, or Pop Rocks. (Those happen to be the most popular items these days, Shimmerlik says. “We love selling items that millenials grew up on and have all but disappeared.”)

Indeed, that slightly unique mix of often-sweet rewards and ads is one of keys that has helped Vengo attract the investors that it has. “Vengo is changing the way that brands interact and engage with consumers and providing a smarter alternative for research and sampling. Vengo is already influencing consumer consumption patterns in New York City,”  Joanne Wilson, wife of Union Square Ventures’ Fred Wilson and a prolific investor in her own right, noted in a statement.

“Vengo is attracting tech investors because we’re a tech company,”Shimmerlik told me. “Our team stopped building helicopters and started buildingVengos. We have an incredible group of engineers that spans mechanical, electrical, software and systems. We’ve built everything in-house. We literally have a warehouse in the in the Bronx where we have built these things ourselves.”He also points out that the advertising element is a digital media network connecting ads directly to point of purchase. “We are creating interactive retail where it never existed before.”Vengo machines currently only take payment by credit cards. But there will be plans to add new forms down the line. “We ran a campaign for Uber allowing users to order a private car from Vengo,” he noted. “We are just getting started. We are currently integrating mobile for payment and not only plan to accept Bitcoin – we plan to be a Bitcoin ATM. We will blow people’s minds what is possible from a ‘vending machine.’ That is a promise.”

Vengo Labs has some other irons in the fire: it recently partnered with CC Vending, a large vending machine operator in New York, to handle logistics and fulfillment. “CC Vending is investing their time, effort and resources in Vengo. It is a great fit,” he says. “Vengo is the design, software and tech company that manages Vengos remotely and helps brands bridge online and offline to engage consumers.”

No news on whether the Vengo ad network will be appearing elsewhere but it sounds like that may be the intention longer term.

It’s also on the hunt for a partner to go out internationally. “We’re doing a pop up Vengo with the new brand Hickies at the Pictoplasma conference in Berlin,” he says. “We are looking for experienced operators to partner with in Europe.”

As for TaxiTreats, that’s still to come, too. “We have a deal in place to launch Vengos to a fleet of busses with an innovative owner,” who is declining to be named. That’s not saying the taxi opportunity, has, er, driven away. “We will get into the NYC taxis!” he says. “We are the NYC Economic Development Corporation’s NYC Next Idea 2012! We’ve had offers from other cities. It is just a matter of time.”