With the rise of the cloud, external hard drives have nearly gone the way of the dodo. After all, who needs a fiddly, easily broken hard drive in an era of always on, high-speed Internet. But sometimes you want a super-dense, high-speed hard drive for backups and storage and the $299 Seagate Fast HDD USB 3.0 4TB fits the bill.

Reviewing a hard drive is actually quite tough. There are few out there of any note and, barring some unique hybrid models, there’s not much to say. This drive is particularly interesting because it is so , for lack of a better word, dense. Four terabytes is nothing to sneeze at, especially in a 4.6″ x 3.2″ x 0.88″ package that little bigger than a pack of cigarettes. Inside are two 5400 RPM 2TB drives working in RAID 0 configuration it it runs entirely on USB power. The drive includes a dual-headed USB 3.0 cable that is sufficient for most uses and, for lower-powered ports, includes a secondary USB jack to carry power to the drive. It also includes a standard, single-headed USB 3.0 cable.

The drive works perfectly out of the box and Seagate includes NTFS drivers for OS X users. You can also simply reformat the drive Mac OS Extended for Time Machine use.

What does the speed mean in real terms? Using Time Machine I was able to back up 188GB of data in about 50 minutes. It took about 5 seconds to move 800MB of data from an SSD to the Fast drive over USB 3.0. I also ran some basic benchmark tests using the Blackmagic Disk Speed Test. 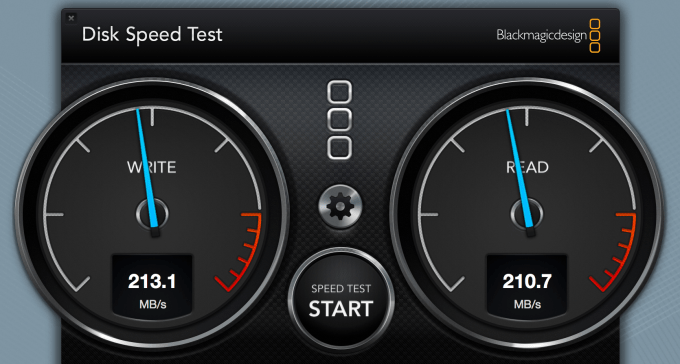 This is the benchmark for the drive in question. At 220MB/s on average, this didn’t look very speedy. However, after a bit of digging, I was able to find a previous generation Seagate drive to compare it to. 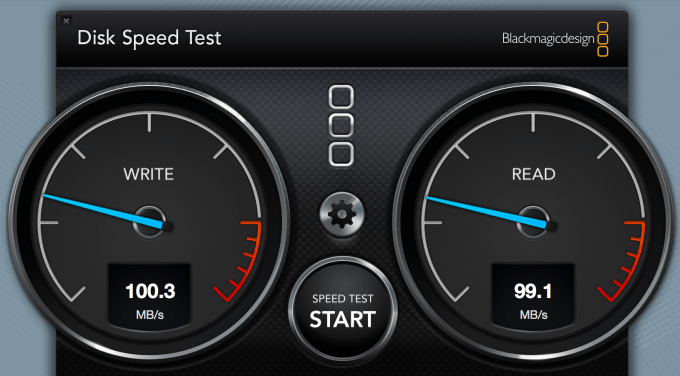 This drive, the SRD0SP0, is obviously like comparing apples to oranges. The drive maxed out at 100MB/s on USB 3.0, a noble effort, but definitely stymied by the RPMs of the included drive.

Finally, as a benchmark, I tried the SSD inside a Macbook Pro 2013 edition. The Seagate drive – still spinning inside its little case – was half as fast as Apple’s latest and greatest.

The metal top and plastic casing look rugged enough but I wouldn’t recommend dragging this drive around on long trips. I suspect the two drives won’t enjoy much rough treatment although transport in a padded bag shouldn’t be a problem.

You’re not getting solid-state speeds by any measure with this drive but you are getting at least twice as fast as a previous-generation backup drive drive and, at $299 for 4TB, you’re paying less than $75 per terabyte. It is surprising to find so much storage in such a small package. Sadly, one wrong move could wipe out terabytes of data and because the drives are in RAID 0 configuration, those wrong moves could be truly disastrous as there is no on-board backup of your data. However, in terms of convenience, portability and speed, this little drive is quite compelling for folks looking for a small, portable backup solution.