Fresh on the heels of Vine’s expansion into private video messaging last week comes today’s launch of a new video chat app called Convies, offering a dedicated experience for sharing short video messages with friends or groups of friends, as well as with your broader social networks like Facebook and Twitter.

The company is being incubated at Lerer Ventures’ Soho Tech Labs, where it was originally envisioned as Vine-like experience, but within a closed environment. Of course, as luck would have it, Twitter-owned Vine beat them to the punch with the launch of its own direct video messaging on Friday. 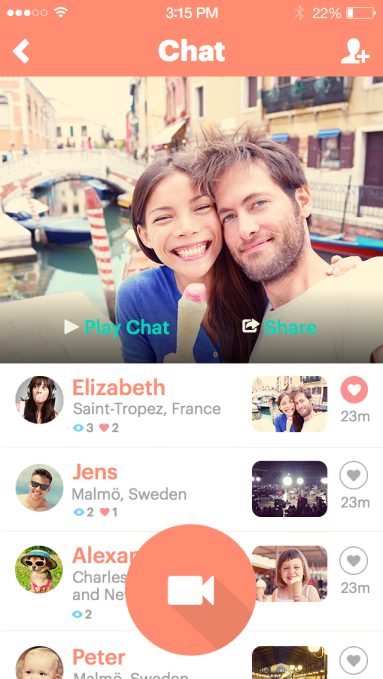 But founder Michel Loenngren believes there are still enough differentiating features within Convies to give his app a shot in this space. Plus, he points out, when an app that’s best known for one particular type of experience, like Vine is for its public videos or Instagram for photos and video, later tries to expand into another area, like direct messaging, it’s not always successful.

“Vine is a social application that also introduced sending direct messages,” he explains. “Convies is more of a chat application – like a WhatsApp or Line-like application – that’s completely tailored for the native video experience,” he says.

The app grew out of Loenngren’s earlier efforts with a mobile video app called TimeFreeze, which he developed as a side project while working as the lead developer for an investment bank in Japan. Lerer Ventures reached out to him, he tells us, as they were looking for people already working in the mobile messaging space.

And after some conversations with the team, Loenngren ended up quitting his job and relocating to New York where the idea for Convies soon came about. 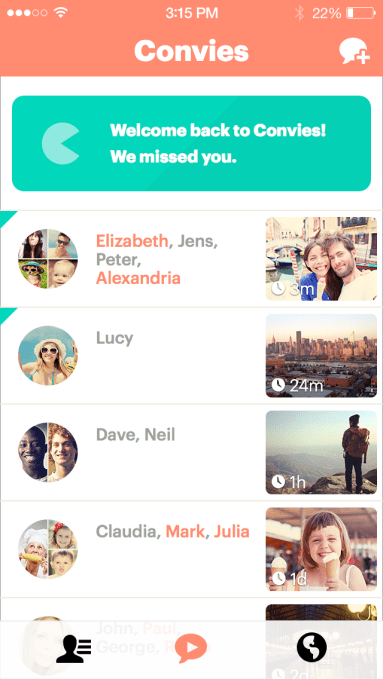 While TimeFreeze had allowed users to mess around with a video’s speed – something Loenngren was interested in thanks to his background in both engineering and physics – Convies now repurposes some of that technology to offer a more social experience. That is, you can optionally also edit your video’s speed in the Convies app, slowing it down or speeding it up by dragging a slider bar before posting.

The app is also differentiated from general-purpose messaging apps because its focus is on immediately playable native videos, which can be shared with friends or groups, and it provides a way for you to play back a series of videos in your chat stream as one single video story.

Videos are recorded in a similar way as on Vine and can be up to 6 seconds long. They can also be “locked” to prevent sharing, or made public which has them appearing in a Vine-like video feed. The app’s quick sharing feature lets you send a video to the public network on Convies, or to other social services including Facebook, Twitter and WhatsApp, as well as email. 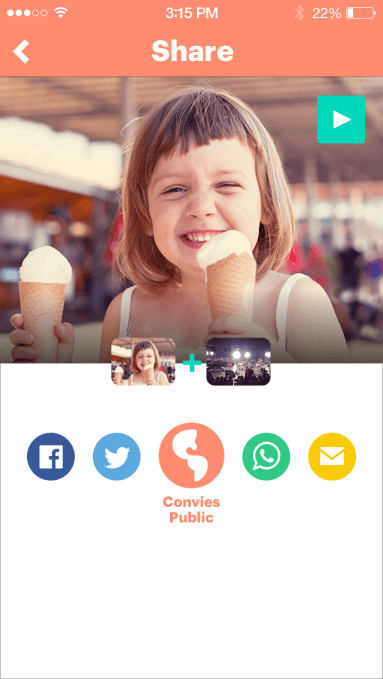 Lerer Ventures invested a small amount into the company in exchange for 40% stake, and provided the office space and resources that helped get Convies off the ground. Now a small team of four, the end result is a well-built app that, though very similar to Vine in a number of ways, is also an engaging experience on its own and has a different feel.

Being on Vine, like being on Twitter to some extent, can feel like a public performance at times – something that has attracted a crowd of creatives to the Vine platform. Convies, however, feels more personal, thanks to its messaging focus.

Of course, video messengers, like mobile messaging in general, is a super-crowded space, where the app will have to compete not only with other video sharing services, but also the big-name mobile SMS replacement apps which these days tend to support a variety of multimedia, including video.

Convies is live now on iOS, and an Android version is in the works.