HBO Go crashed during the Game of Thrones’ season premiere due to “overwhelming demand,” potentially affecting millions of viewers. The service said that it has returned to several platforms and “is working hard towards full recovery.”

But that might not be enough for fans who are almost as devastated as they were during [SPOILER ALERT] last season’s Red Wedding. 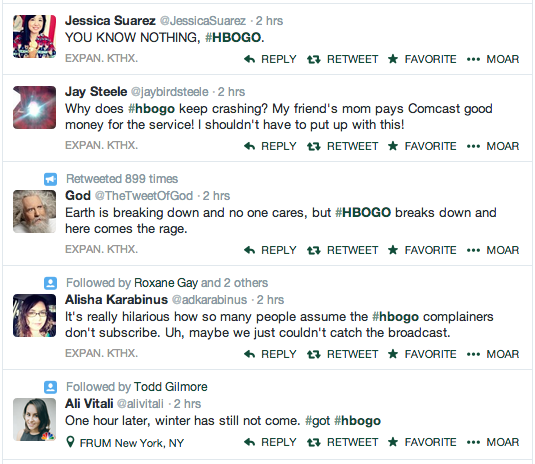 In a statement to TechCrunch, a HBO Go representative said:

“HBO GO did experience issues due to overwhelming demand around the premiere of Game of Thrones. The service has returned to several platforms and we are working hard towards full recovery, which we expect soon.”

This is not the first time HBO Go has crashed during a highly-anticipated episode. An outage last month during the season finale of “True Detective” caused similar outrage among fans.

In fact, some speculated that HBO purposely allows its streaming platform to get overwhelmed to stop subscribers from sharing their login information with non-paying users, which HBO CEO Richard Plepler has denied.