Health tracking app Human just added a few new features to its latest update. First, the app now supports Apple’s M7 fitness chipset if you have an iPhone 5s, while retaining compatibility with iPhone 4S and iPhone 5. The company also added a new daily summary to keep track of all your activities.

With the new activity recap, Human now competes directly with more traditional activity apps, such as RunKeeper or Runtastic. At heart, the app remains a sort of smarter Fitbit for busy people.

Human is a passive iOS app designed to help you stay healthy. The goal is to move for 30 minutes every day and to keep up with this simple habit. The company calls this the ‘Daily 30′.

The app now tracks 2 million activities per week. It could probably represent anything between 10,000 and 100,000 daily active users. Yet, a major challenge is coming up. Apple is interested in this space — rumor has it that Apple will add a Healthbook app in iOS 8 and take advantage of the M7. While not impossible, it’s always harder to compete with a first-party app.

Human can count on its well-thought-out design. But there are still users who move less than 30 minutes a day. For these users, the company is trying to find new ways to motivate them. You’ll see that in upcoming updates. 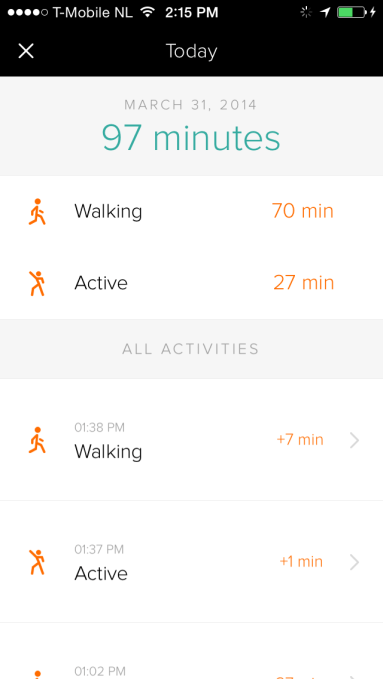