Competitor Shutterfly should not be too concerned, however.

Kodak Alaris, for those unfamiliar, is the personalized and document imaging businesses group that retained the license to the Kodak brand following Eastman Kodak Co.’s exit from bankruptcy last fall. The company today offers several photography-focused mobile applications for consumers on iOS and Android.

The benefit of using Kodak’s new iPad app is the turnaround time. After building your photo book or ordering prints, you can pick up your creation same-day at a nearby Target or Bartell Drugs store. That’s convenient in terms of last-minute gifts, and the app didn’t throw as many bugs my way as when I tried to use a similar app called Moments shortly after its launch in order to pick up a photo book at a nearby Walgreens. (Walgreens makes an API available to startups, which is both a good and bad thing for its brand, as it turns out.)

However, while the Kodak app is usable, it’s definitely not what one would call enjoyable. The whole experience looks like they ported some dated kiosk software program to the iPad – either that, or some website from the pre-Web 2.0 era. The background is black, with photos falling from the top of the screen to the bottom (flourish!), and generally speaking, the whole application seems as outdated and out of fashion as the Kodak brand itself. What a shame. 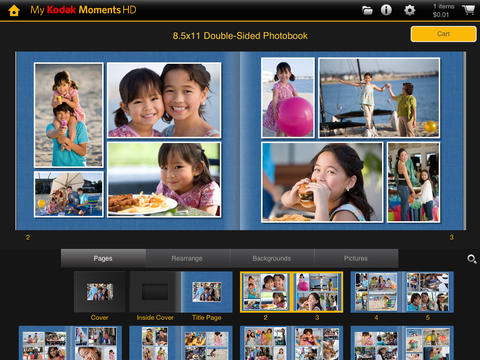 Even the App Store description was kind of awful, with the company referring to Yahoo’s Flickr as “FLICKr” (you can grab photos from FACEBOOK and INSTAGRAM too, it says), and included the groan-inducing joke “it’s easy to do it your ‘selfie!'”

This isn’t just in their App Store copy, it’s, like, their slogan:

The photo book prices are reasonable, though, with a 5″x7″ 14-page softcover for $7.99 going up to a 8.5″x11″ double-sided hardcover book for just $19.99. That’s cheaper than Shutterfly, and when I’m being super stingy, I may be willing to squint my eyes to use a terrible-looking app like this in order to save a few bucks.

The iTunes download (for your mom or dad) is here.