Today, the Internet glue service IFTTT gets an iPad app to complement its offerings on the iPhone and the web. You can also now use native push notifications in your recipes, and collections of recipes have gotten much more exposure.

The addition of native iOS push notification support will be welcome by those of us that have custom crafted alert recipes. If you were triggering an app that had its own push notifications built in, you were just fine, but if you were winging a custom setup that sent you a message or alert you had to use services like Pushover to ping a notification. I don’t mind Pushover specifically, but I found that sending a text was more reliable. But that led to a buildup of texts from IFTTT and an additional sender that I didn’t really need. Making the standard notification service available to the IFTTT app on iPhone and now iPad means a more streamlined alerts system.

This also means that you’re able to send yourself ‘lighter’ one-off alerts that felt too heavy to send a text or launch an app. Who knows better about what you want to know than you? 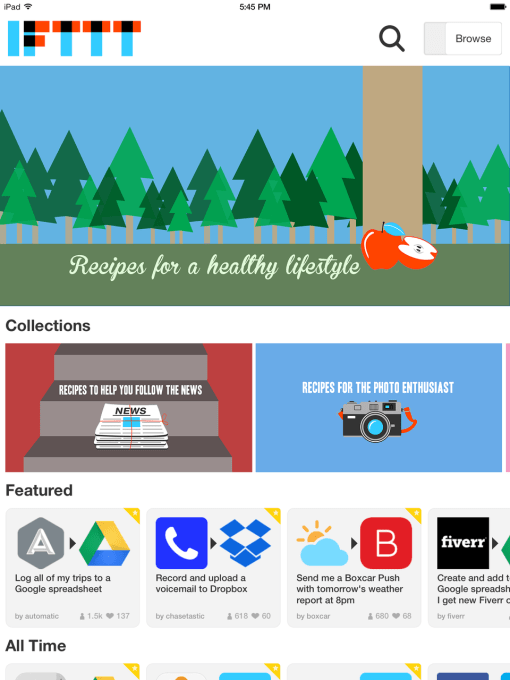 Adding curated collection sections in the apps makes a lot of sense, as collections have been available on the web but haven’t been made prominent before. You’ll see stuff for the connected home, travel and a bunch more and these will be rotated through every week. Offering a coherent list of recipes around a particular use case does a lot to emphasize the usefulness of IFTTT.

The IFTTT team has also added location triggers to the iOS Photos channel, which lets you perform an action only when you shoot images in a proscribed area. Good for creating location-aware albums or only posting images when you’re on vacation.

IFTTT says that Android is still in the works, but that they’ve “almost nailed it,” so hopefully soon. You can snag IFTTT for iPad here.