A company called GemShare wants to formalize what’s today a somewhat haphazard and frustrating process of getting personal recommendations from friends, with the introduction of a new iPhone app that lets you quickly ask for the best local recommendations for everything from mechanics to doctors to dry cleaners and more. 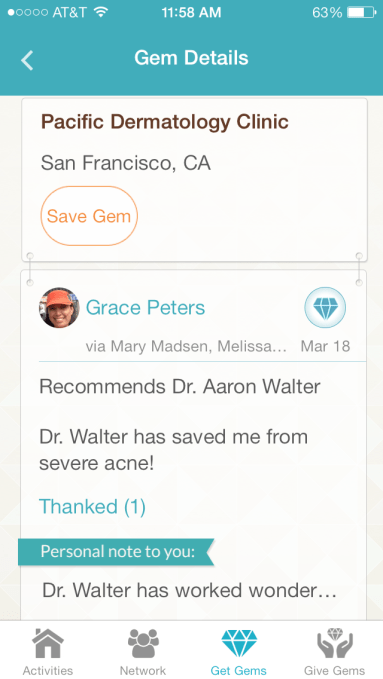 GemShare was founded by two women, Maryam Mohit and Claudine Ryan, the former an early employee at Amazon, who ran online experience and helped build Amazon’s recommendation engine, and the latter who has previously worked in startups including Looksmart, Chow and EatingWell. The founders have been friends for several years, following Mohit’s move to Seattle – something which originally seeded the idea for GemShare, as it turned out.

“[Maryam] needed a lot of recommendations for things – the kind of things that you need when you move, like schools, doctors, hair stylists, piano teachers – things like that,” says Ryan. Then, several years later, Mohit was stuck trying to remember who had recommended a great physical therapist to her some time ago, and was frustrated by the process of having to ask around, talking and emailing friends for recommendations and not making much progress in finding someone who had a good suggestion.

“I was saying to Maryam, in this day and age, where technology should be able to help this kind of problem, it’s frustrating that I’m not able to tap the people who probably have the best answers for me, that are right in front of my fingertips,” Ryan explains.

While obviously there are a variety of services, large and small, for local recommendations, including of course, companies like Yelp and Foursquare, Google Places, or industry-specific resources, like ZocDoc, what the co-founders wanted was something that let them ask their own personal network of friends and friends of friends, not the general public. And to be clear, GemShare is also not about offering online reviews, just a straightforward recommendation with a simplified rating system.

The process of contributing is easy as well – you simply start typing the business name in the search field, a list of results appears, and you then tap the gem icon to leave your recommendation. You can optionally add a few words about the business, but it’s not required. It’s a less complex, time-consuming way to share your opinion than on nearly any other online review site, which is an advantage.

Users can also create and join groups in order to better network with others like them or interested in the same sorts of things – for example, a group of parents who attend a particular school, a neighborhood group, church friends, an alumni group, or anything else. 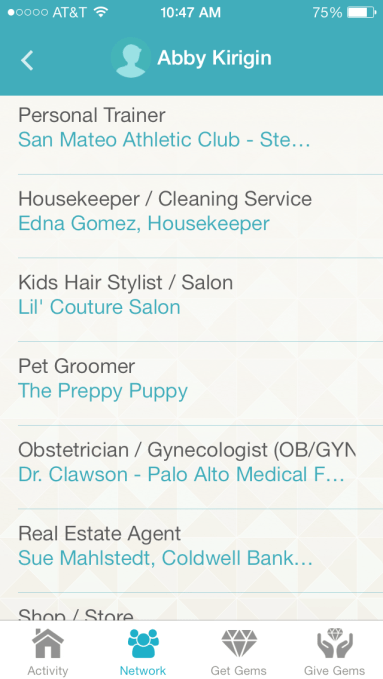 The app itself is well-built and easy to use, if a bit utilitarian. However, because of its overlap with other recommendations resources, it could face an uphill battle in getting users to participate. While there’s obviously a draw for those who are in need of a particular recommendation, there’s little incentive in the current version for others to sign up and share their recommendations or respond to requests…beyond the feel-good glow of helping friends in need, of course.

But GemShare does offer a workaround for the sign-up problem, though – it lets you send out your requests via email, and respondents don’t have to register in order to answer.

The founders are targeting moms with this application, and are hoping that growth will come via word-of-mouth, primarily. In testing the app, they found GemShare’s early adopters were heavily engaged, with 70% contributing content – a figure that’s much higher than the typical internet average, where generally only a small minority actually creates content for a larger, passive majority to consume.

Local recommendations startups have proven to be tough, with a number of experiments in this space failing or closing in the years past, including Kevin Rose’s Oink which closed down in 2012, the ex-Googler backed Stamped which sold to Yahoo, restaurant recommendations engines like Clever Sense, Ness and Hoppit selling to Google, OpenTable and XO Group, respectively, personalized recommendation engine Hunch exiting to eBay, Tout’d and Livestar shutting down, and the list goes on and on. Whether or not tapping into moms’ word-of-mouth power will make GemShare take off, of course, remains to be seen.

The San Francisco-based startup is a team of seven, and closed on its seed round last April. Eventually, the goal is to help businesses, especially small businesses, get word-of-mouth leads, but for now the company is focused on the product, growing its user base, and becoming a valuable resource for local recommendations.

The app is a free download, here on iTunes.