I met Emile Petrone, the raffish owner of gadget marketplace Tindie, a few weeks ago and he told me that I would like his site. It turns out I really do. Part maker community and part amazing e-shop, Tindie is where good handcrafted gadgets go to become businesses. It’s basically a cool place to find electronics projects for you and yours including sections for kids, musicians, and even fans of the great outdoors. Think of it as the island of misfit gear or Etsy for solder.

Petrone started Tindie in 2012 and now has some solid traction. He saw 10,000 orders so far and has shipped to 71 countries. He’s also celebrating the 2,000th item on the site. Before starting the market he spent a year at Yelp then and Redbeacon and then worked at Urban Airship and left to build the marketplace.

“We are the only marketplace geared specifically towards indie hardware and maker-made products – small batch, niche, electronics. We say, ‘see the next GoPro before it goes pro,'” he said. “That means our stuff is generally geared at niche categories and verticals and not consumer focused (Etsy for electronics). We are on the cutting edge where a maker lists a project without an idea of if it will sell or if someone is interested. However if it starts selling, the maker iterates quickly – multiple iterations in a year.” 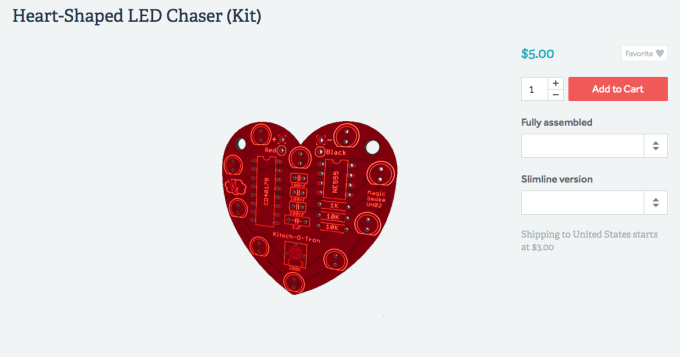 To use it you simply upload some images and data about your product and sell it through their site. The service acts as a middleman and takes 5% of the sale as well as credit card fees. Tindie uses PayPal and Stripe to handle payments.

The company raised a seed round last fall to the tune of $1.2 million from Andreessen Horowitz and others. They’re focusing on grabbing cool products like this clever phone tester designed to press touchscreen buttons unto infinity and this clever little Simon kit.

Petrone came up with the idea while messing around with Arduino in 2011.

“It seemed like something was changing as people had begun posting interesting hardware projects on Reddit, Hacker News, and Kickstarter. So I posted the question on Reddit if anyone would support a marketplace for these types of products,” he said. “The response from that has been incredibly inspiring as we have customers ranging from NASA, Google, Intel, to libraries, CS departments and hobbyists. I have JPL’s purchasing department saved in my contacts. Never thought I’d have NASA as one of my contacts.”

The company doesn’t just want crowdfunded projects. In fact, Petrone really enjoys seeing unfunded indie hardware pop up on the site. Because the little guy rarely gets a chance in the market and some of the hardware is so esoteric, a marketplace like Tindie makes sense. Adafruit already proved it was a good idea. Now curators like Petrone are adding even more fuel to the maker fire.