Though they receive much less attention than other apps, social casino games are one of the top-grossing categories in mobile gaming, says a new report by Distimo.

The report used data from Distimo AppIQ to see how much revenue different publishers are making in the iOS App Store and Google Play.

Even though they don’t get the attention of Supercell, King, GungHo, and the other highest-grossing game publishers, social casino game makers still have a significant presence among the top 100 grossing apps in the iOS App Store and Google Play.

Distimo found that in the iOS App Store, the top overall grossing publishers globally from March 17 to March 23 included 20 publishers among the top 100 who publish at least one social casino game. On a similar leaderboard for Google Play, it found 19 publishers. 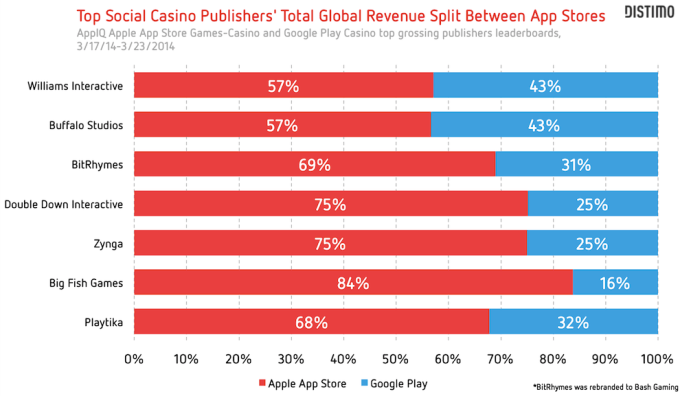 On the App Store, Playtika, the creator of Slotmania, was the number one publisher and accounted for 21% of total revenue among the top 10 publishers. Big Fish Games came in second, with 16% of the total revenue. Zynga was third, with 12%.

Playtika was also number one on Distimo’s leaderboard for Google Play, with 22% of total revenue among top 10 publishers. The next highest-grossing developer was Buffalo Studios with an 11% share, making the gap between the first and second publishers much more pronounced than on the iOS App Store.

Playtika is among several top publishers of social casino games have been acquired by casino operators and game manufacturers. It is now owned by Caesars Interactive Entertainment, a subsidiary of Caesars Entertainment Corporation. Caesars has also purchased Buffalo Studios, Pacific Interactive, and the rights to the World Series of Poker mobile app from Electronic Arts.