As expected, Microsoft debuted the Windows Phone 8.1 update, previously internally known as “blue,” this morning at its Build developer conference in San Francisco.

The software will roll out to consumers over the next few months. For new devices, Windows Phone 8.1 will come pre-installed on new phones starting at the end of the month. 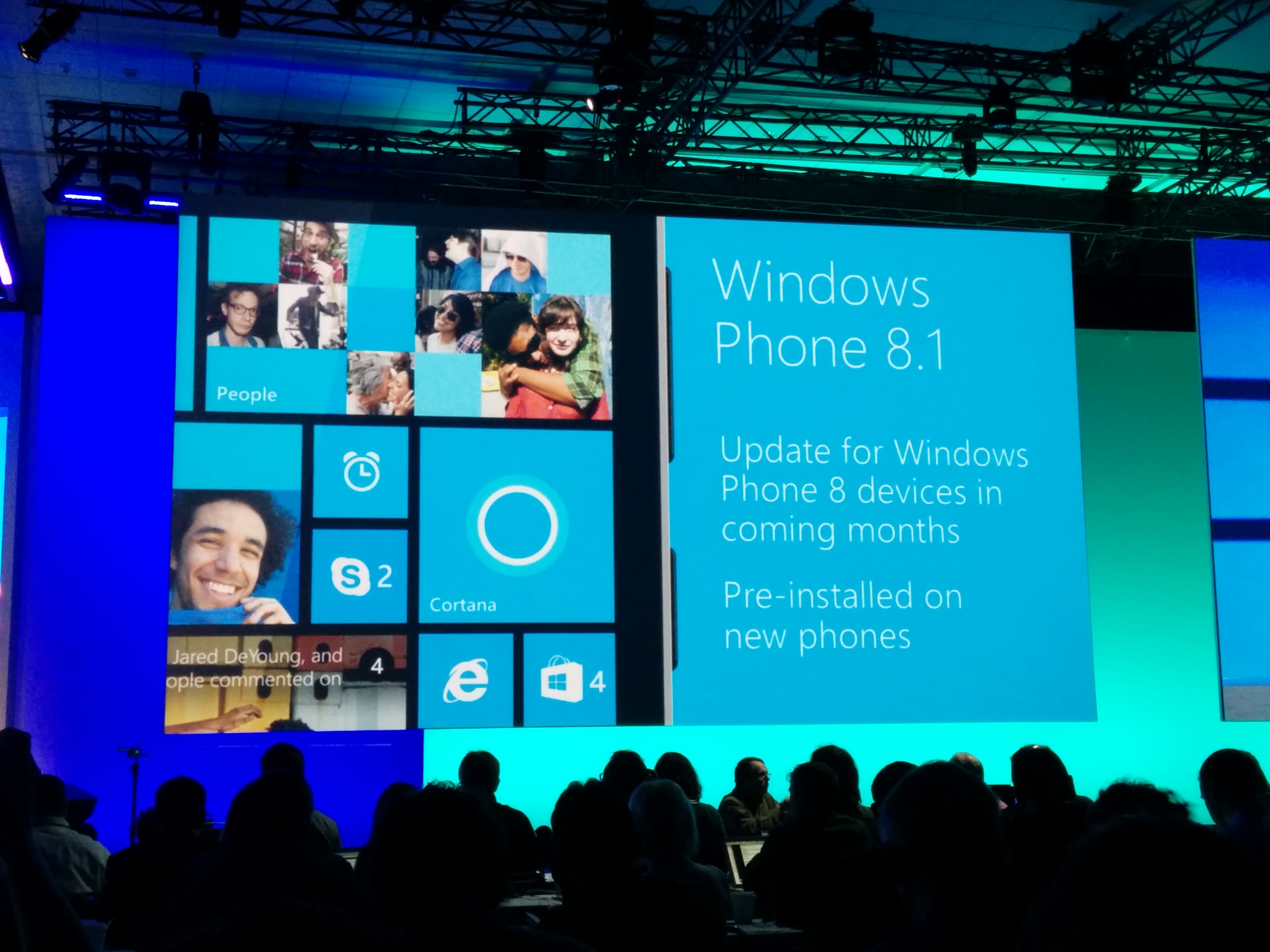 Windows Phone 8.1 is a set of updates to Windows Phone that have been long rumored and leaked after Microsoft let some developers play with the new code in February. This morning, Microsoft confirmed a number of those rumors. Microsoft also announced two new OEM partners: Micromax and Prestigio.

The new code includes a notification location called Action Center. It includes battery information, SIM data, and so forth. Apps can also show up in the Center, using new APIs that developers can interact with.

Also new are lock screen changes. APIs allow apps to “take over” your start screen, making it more interactive. This isn’t done yet it seems, but should be out in the next few months.

The Start Screen now allows users to choose the density of their opening user interface, and users will be able to set a background photo.

Microsoft also announced its personal assistant Cortana, as expected. Cortana is powered by Bing, also as expected. The idea behind Cortana is that it will learn from the user in question. Akin to Siri, Cortana will be able to schedule, text, search, and the like.  Interestingly, Cortana can be used by other applications, extending what is possible with the service.

TechCrunch will have a fuller look at Cortana here. Cortana will launch in beta in the U.S. and will shed the beta tag when it leaves these shores.

The Phone Store has been improved to have a heavier focus on apps. Lists are now provided to users to allow them to sort apps by popularity and so forth. The goal with this set of changes is to drive more app “engagement,” according to Microsoft.

The calendar in Windows Phone 8.1 has been updated, allowing for panning between days, and new views like looking at a full week.

On the business side of things, Phone 8.1 will support VPN to allow it to tunnel into corporations, and also send and receive and sign encrypted email. Companies can also now disable applications, forcing employees to, you know, not have fun.

A newly updated version of Skype is better integrated into the phone element of Windows Phone 8.1 — you will be able to scoot from a regular phone call to a Skype video call.

And finally, Microsoft has improved the keyboard on Windows Phone 8.1. It is “way better” in the company’s estimation. In short, you can now swipe around the keyboard, as with many Android setups. iOS notably still lacks this. Here’s what it looks like: 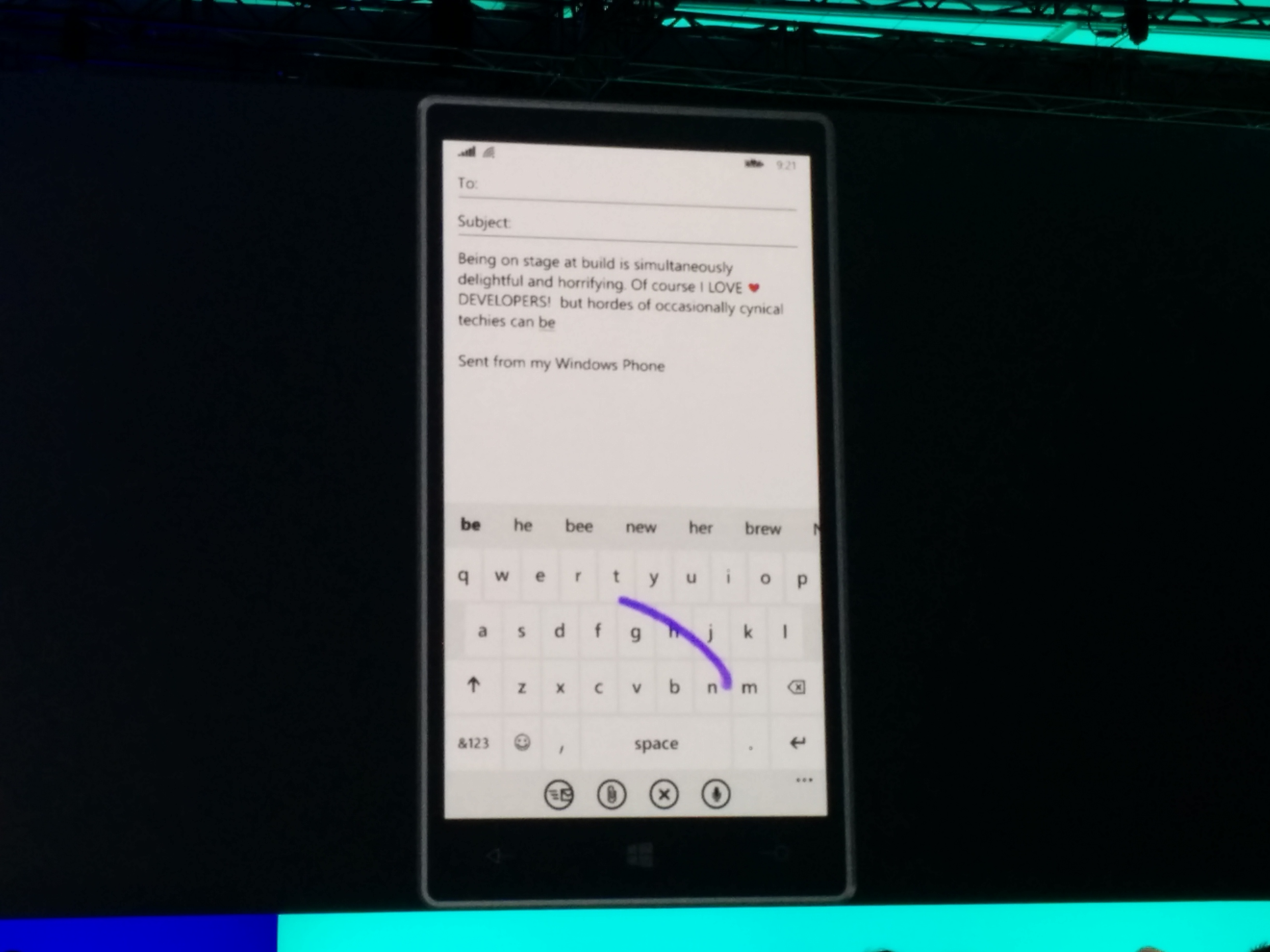 Internet Explorer, yes, will move to version number 11 in the update. Microsoft didn’t say all that much else about IE 11 on Windows Phone 8.1, though.

The new features follow a smaller-than-expected update to the Windows Phone update in the past holiday season. The change of cadence from a 12-month cycle for Windows Phone to an 18-month pace was surprising. Still, today’s updates are substantial. A quick read of the Windows Phone enthusiast community on Reddit indicates that among fans of the mobile platform, the updates are welcome. What community reaction will be now that the code is bared remains to be seen.