Turns out the ‘G’ in Moto G stands for ‘Go!’. Motorola’s well-reviewed sub-$200 Android handset has given Motorola an unexpected boost in the U.K. — a market where the brand had gone into near-total stasis.

Motorola had been languishing with almost zero share in the U.K. but according to smartphone sales data from Kantar Worldpanel ComTech released today, covering the three months to February 2014, the Moto G has driven a local Motorola resurgence, with the company climbing from nearly nothing to take a 6% share of U.K. smartphone sales over a six month period.

Which just goes to show that a decent handset — at the right price — can lift a moribund brand. HTC take note.

The Moto G launched in select markets including the U.K. last November when Motorola Mobility was still an arm of Google (rather than an extension of Lenovo, as it now is).

The handset had the feel of being a deliberate Mountain View showcase — designed specifically to show other makers how to make a decent low end Android phone. And, by implication, how not to. The launch was big on slamming others for making cheap hardware that ran Android badly.

Google’s lessons for what Android OEMs should be doing came across loud and clear, via the Motorola mouthpiece: they should be “complementing” Android — by focusing on areas such as the display, battery life and camera, it said — rather than adding competing custom skins that confuse and clog up the experience.

That modus operandi was applied to the creation of the Moto G — and the resulting handset was low on price but not low on quality. Which is certainly not true of all budget ‘Droids.

The Google Android OEM philosophy appears to be paying early dividends for Motorola (even though Mountain View itself has moved on) — in the U.K. at least. 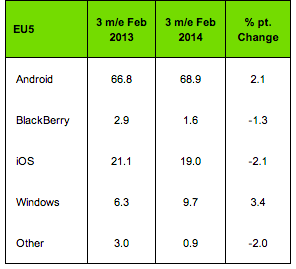 Apple’s iOS retained its second-placed position across Europe’s five major economies, with 19% share (down the same slight proportion that Android was up), while Microsoft’s Windows Phone edged up a little, for a 9.7% share of sales (and it’s now customary third place).

Commenting on the data in a statement, Kantar’s Dominic Sunnebo said: “Motorola was nowhere in Europe before the Moto G launched in November last year, but the new model has since boosted the manufacturer to 6% of British sales.  It highlights the speed at which a quality budget phone can disrupt a market.”

In the U.K., the Moto G has attracted what Kantar calls a “very specific consumer profile”, with almost half of owners aged between 16 and 24, and an overwhelming majority (83%) being male. Moto G owners also generally come from lower income groups, with 40% earning less than £20,000.

Kantar said close to half (48%) of U.K. Moto G sales were made online. It added that increasingly commoditised smartphones and increasingly tech savvy consumers, who are doing online research (such as reading reviews) to determine which phone to buy rather than asking in the local phone shop, are factors that have enabled the Moto G turnaround — and are also helping to lift other makers of well-made budget devices.

The direct online sales pipe route to consumers is growing, eating into carriers’ influence with their network of retail shops.

“With virtually no existing customers to sell to in Britain, the Moto G has stolen significant numbers of low-mid end customers from Samsung and Nokia Lumia,” added Sunnebo. “The same pattern can be seen in France with Wiko, which has 8.3% share, and Xiaomi in China with 18.5%.”

Kantar also noted that Android recovered its momentum in the U.S. — following an iOS sales share peak after the release of the iPhone 5s and 5c last year. Android’s share in the region is up 3.9 percentage points compared to last year, with LG the fastest growing Android brand.

LG’s share of the U.S. market has now topped 8% making it the third largest manufacturer in sales.  And while LG’s sales over the past few years have been led by low to mid-end Optimus models, the high-end G2 is now dominating its sales, according to Kantar’s data. 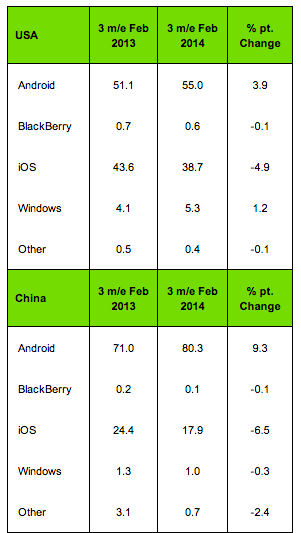