For better or worse, Samsung, HTC, and the rest of the Android manufacturing lot just looove to mess with the way Google’s OS looks and feels. So much so, in fact, that the OS sometimes stops looking like Android at all.

Seemingly annoyed by the lack of credit where credit is due, Google has started asking manufacturers to show a “Powered By Android” logo at startup.

According to some reports, this is now a requirement if the manufacturer wants access to Google’ first-party stuff: the Google Play store, Google’s official Gmail app, etc. (But, pfft, who wants that stuff? Besides absolutely everyone who buys an Android phone.)

The guys over at Android Police have managed to get their hands on a document that outlines exactly how the “Powered by Android” text has to be displayed. The too-long, didn’t read version? It has to be visible, it has to be big (at least half an inch tall in most cases), and you can’t crowd it into obscurity. 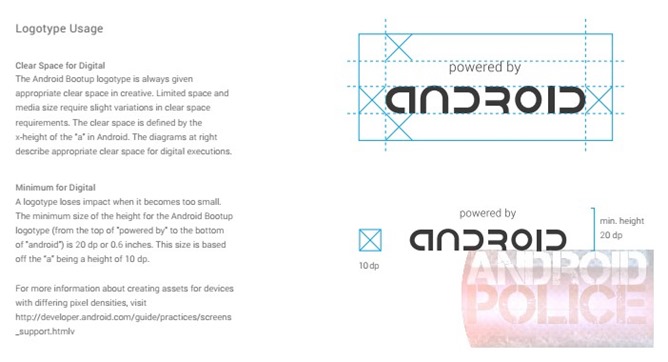 One thing that isn’t quite clear yet, however, is when the logo needs to be shown — and how often. The just-launched HTC One (M8) for AT&T, for example, only shows the logo (pictured up top) the very first time you turn it on. Every time thereafter, the HTC logo sits alone. This is likely a detail that Google/HTC/Samsung and the rest are still trying to work out.

Being a bit of a phone geek, I find myself talking to people about their phones fairly regularly. It’s kind of shocking how many people still answer “What OS does your phone run?” with “I don’t know. Samsung?”