Microsoft built it, and they came: Office for iPad is enjoying a big first day, with Word for iPad becoming the most popular app for the device in the United States just five hours after it went live.

Data for the newly released Word, Excel, and PowerPoint apps is still somewhat unfilled given the youth of the apps, but what is out there looks good. PowerPoint, for example, is the fourth most popular app in the U.S and Excel is rocking the No. 3 spot: 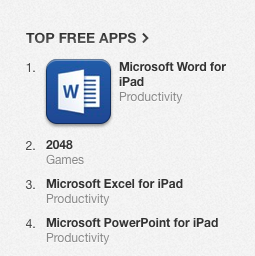 A question only sometimes asked before the release of Office for iPad was would anyone care? The conversation instead centered around how much oxygen the appearance of Office on Apple’s tablet would suck from the lungs of Windows. Those who bet that there was real market appetite for Office on tablets have been proven correct.

It doesn’t hurt that the apps themselves appear to be quite nice. TechCrunch’s review of the products was positive. TechCrunch will keep an eye on the charts, but it looks like a good day for Redmond.