This morning Microsoft unveiled and launched Office for iPad, as well as new tools to help companies manage devices that run on platforms other than Windows. The move, while expected, underscored a shift at Microsoft, a lessening the internal hegemony of Windows, long the product considered to be the soul of the software company.

The customers are already using a number of compute platforms, giving Microsoft zero option, in other words, to behave as if Windows was still the only platform game in town. Microsoft, in Nadella’s vision, is “committed” to running its services in a cross-platform fashion.

This is Microsoft’s view of the market. Windows remains “massive” for Microsoft, according to Nadella, who promised that during the coming Build developer conference his company will expound and improve its platform to the surprise of no one.

But Microsoft will not constrain its non-operating system products to its own platform. This has been a transition long in the making. When Microsoft released OneNote for Mac, it joined a number of other Microsoft applications that ran on OS X. Microsoft has built apps for all five major computing platforms: Windows, OS X, Android, Windows Phone, and iOS.

Therefore, to see Office land on iPad is more a culmination of a shift underway for a very long time than a surprising strategy shift.

To hammer that home, here’s part of the list of apps that Microsoft has built and released for iOS: 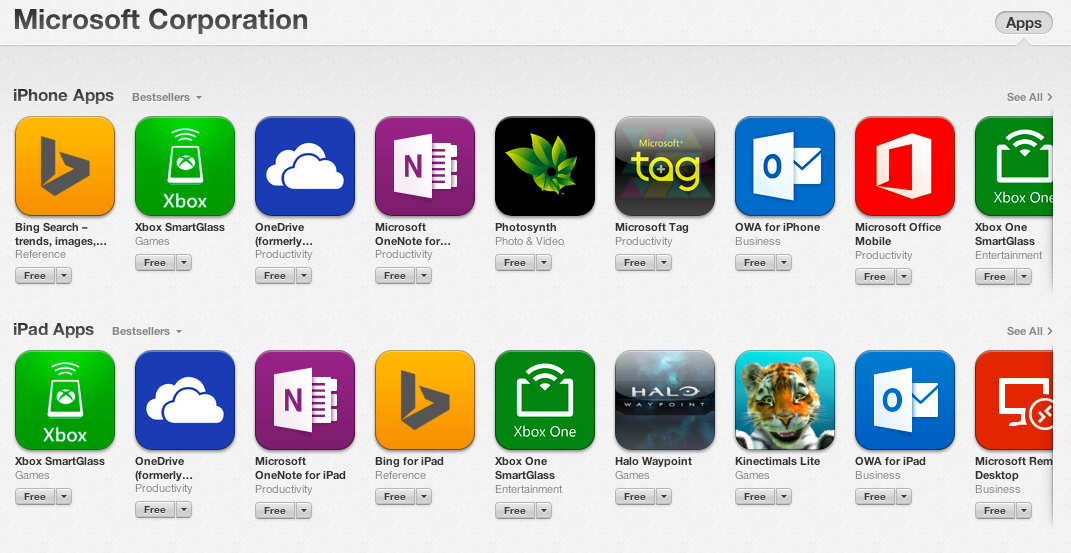 Will the strategy of broad support succeed for the company? By linking the Office apps on iPad to Office 365, Microsoft is at once supporting the iOS, but also linking that support to its cloud and services strategy, so that any momentum it grants to Apple by supporting its tablets will be linked to the success of its more nascent incomes. (Anecdotally, TechCrunch staffers reacted negatively to the news that a subscription was needed. We’ll have a full review of the apps out shortly.)

The bigger picture here is that Microsoft appears to be putting the cloud ahead of the operating system, in that it is locked on the idea that its cloud will be for “everyone on every device.” That is an inherently larger vision than Windows Everywhere, given that it spans more devices and people.

So Microsoft is at once doubling down on Windows, while also committing to support every device with its other products. This makes sense given that services are not tied to a Windows universe — they can sit atop the cloud and run on any device. And if you want to sell the most services you can, you need to be open to selling them on every device possible.

IMAGE BY FLICKR USER John Karakatsanis UNDER CC BY 2.0 LICENSE (IMAGE HAS BEEN CROPPED)