Fancal has such a simple but appealing concept that it’s surprising there aren’t more smartphone calendars like it. The iOS app showcases photos from your library, with dates laid out in an unobtrusive sidebar. Created by Dutch startup We Are Wow, Fancal is made for people who usually shy away from time management apps.

In fact, it’s more likely to appeal to the users of memory-keeping apps like Timehop, Heyday, and PictureLife, which dig up old photos from your phone’s album and social network profiles.

Weeks are arranged in a thin “ribbon” down the left side of the screen and display the number of events you have on each day. Tapping on a date produces a pop-up window with your schedule. Fancal has icons you can use to tag events in different categories (food, business, leisure, sports, or miscellaneous). 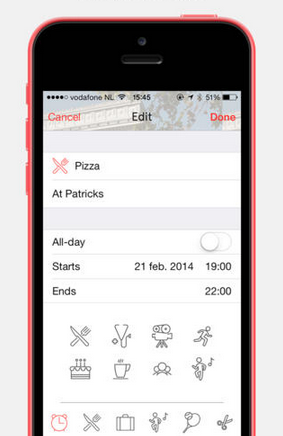 Aside from that, the app’s focus is on showcasing your photos. Fancal is customized by adding pictures to its album in iOS photos, which is automatically created when you download the app. If you have multiple snaps in there, the calendar will automatically display a new one each time you open it.

Though Fancal lacks the snazzy features of popular calendar apps like Sunrise, Tempo, and Peek, de Vries says its goal is to attract people who are still using paper to plan their days instead of “hardcore calendar users who are looking to schedule every 15-minute slot.”

Fancal’s design also lends itself easily to monetization. We Are Wow has already struck content partnerships with football clubs in the U.K., Portugal, and the Netherlands, including Chelsea FC, Everton FC, and SL Benfica.

As the “official mobile calendar” for each team, We Are Wow produced apps pre-loaded with team photos and schedules. De Vries says the startup is also seeking deals with other fan communities and consumer brands, so keep your eye out for that Bieber Fancal (or not).