Bizible CEO Aaron Bird said this integration is the first of its kind for Optimizely. By giving sales teams A/B test data, they should get a much more sophisticated understanding of which efforts are paying off in actual sales.

Without it, he said that if a company wanted to test out different website variations to see how they affected sales, they’d have to base their decision on how many leads were generated, not the number of customers or revenue. That meant a variation making more money but driving fewer leads would be labeled as worse.

Here are some additional details from the blog post about what the integration allows customers to do:

Bird added that this solves problems that Bizible itself faced as it tried to test different marketing initiatives with Optimizely. For example, he said that some tests, such as A/B testing different prices, aren’t possible without integrating with a customer relationship management system like Salesforce.

You’ll need to be a customer of both Bizible and Optimizely for this to work. If you are, however, Bird said this doesn’t require any customization; since customers are already running the Bizible tag on their website (passing information to the Bizible app in Salesforce), “We automatically grab the Optimizely experiment and variation information and push it to the lead, contact, and opportunity in Salesforce.”

Update: You can read more in Optimizely’s blog post about the integration. 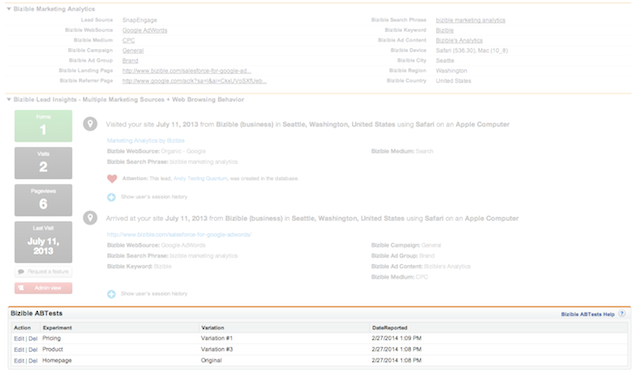