Apple quietly introduced a new “related search” suggestion feature on the iTunes App Store, which began rolling out yesterday to iPhone users on iOS 7 devices. The addition involves showing a user who is searching for a particular keyword in the App Store other search terms that may also be useful. For example, a search for “calendar” may offer similar suggestions like “calendar planner” or “daily planner.”

When a user taps the suggested term or terms, the App Store kicks off a new search for the specified keywords.

The new addition was first spotted by developer Olga Osadcha, then picked up by a number of Apple blogs, including MacStories, AppleInsider, 9 to 5 Mac, and others. 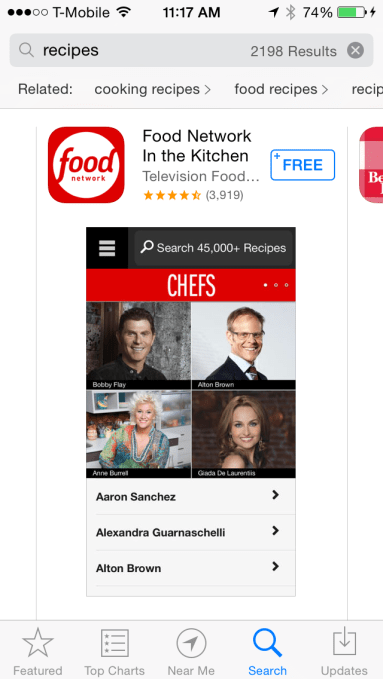 Currently, U.S. users appear to be among the first to gain access to the new feature. Our U.K.-based team here at TechCrunch didn’t see the suggestions when testing this earlier, for example, and, according to Xyo co-founder Matthäus Krzykowski, whose company offers a personalized app discovery service by the same name, the test has not yet appeared in the Swedish, Italian, Polish or German stores, either.

Apple, however, confirmed to us this morning that the new feature will be available to all users by later this week. [Update! Apple reached out later in the day after publication to say that the time frame they provided earlier may have been inaccurate, as it turned out. A full rollout is expected over the “coming weeks,” the company is now saying.]

The related searches appear just below the search box in the App Store app on iPhone, in a scrollable bar that allows a user to better pinpoint the type of application they’re looking for – a feature that’s especially helpful in a marketplace that has bloomed to include over a million iOS applications.

Finding Apps In A Crowded Store

It also comes at a time when it has become increasingly difficult to navigate that store through the charts, lists and other editorially curated groupings alone. Today, there are so many apps that search is often the best way to reach the app you need directly – something that’s not all that different from the long-ago time when we switched from directories of links to search engines like Alta Vista or Lycos, and later Google, to find our way around the web.

Though early reports state that it’s unclear how these search suggestions are being generated by Apple, MobileDevHQ CEO Ian Sefferman, whose firm specializes in a new type of SEO that focuses solely on getting found in app stores (aka, “ASO,” or “app store optimization”) says the suggestions appear to be a combination of both popular searches and keywords, with a weight towards the former.

Apple declined to confirm the details of how the search suggestions work, only saying that it is “algorithm-based.” The company explains the feature is designed to help users refine searches and results, as well as explore the store and discover apps associated with their interests, as defined by the initial search. 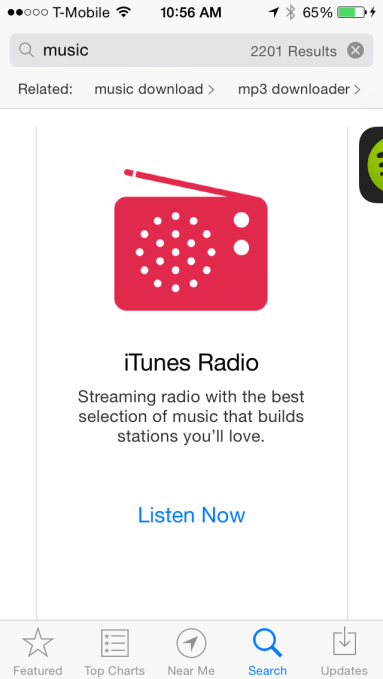 The new addition, it should be noted, coincides with another search feature Apple has been testing over the past couple of months, where they’ve been promoting their own, editorialized search results for specific queries.

For example, a search for “Maps” doesn’t list Google Maps first, but lists a special link to Apple’s “Maps” collection of apps. A search for “Music,” doesn’t show a streaming music app first, but rather an ad for iTunes radio.

While on the surface, the newly added search suggestions and the editorialized search results appear to be separate, unrelated features, it’s likely that they’re a part of a larger plan for revamping App Store search. That plan could see Apple either promoting its own apps in featured positions tied to specific search queries, or even making those featured spots a “sponsored” section, effectively creating something like a “Promoted Trends” or “AdWords” for the App Store.

If so, that could end up being a big business for Apple: Its sizable developer community sometimes struggles to get their new apps found if they don’t have the marketing dollars or know-how to acquire new users and downloads at the rate required to see their recently launched apps ranked in the top charts. By offering specific “related searches,” developers could target users looking for exactly the kind of app they have to offer (e.g. a “daily planner”) rather than trying to compete with every other app developer in their same general space (e.g. “calendars”).

But early tests, like the one below from MacStories’ coverage of the news, indicate that the related search suggestions may still require some tweaking. For instance, they found a search for “twitter” pointed them to “traffic apps” and other unrelated terms, while a search for “food recipes” offered no results. 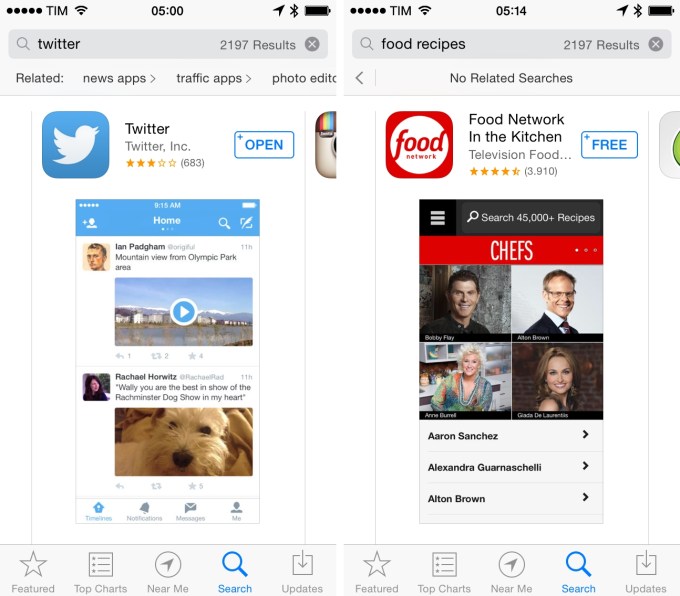 App Discovery Is More Than Search

Still, even when Apple works the kinks out, this addition alone won’t be enough to entirely fix the App Store’s app-discovery problem, as it only solves a problem for those who know what kind of app they want to find. Often, users don’t know what they don’t know; they tend to serendipitously happen across an app because it’s highly ranked in the App Store or in some featured spot, and then install the app to check it out.

That’s why more personalized suggestions – like Facebook’s targeted install ads – have gone a long way to help developers acquire users who will remain engaged with their creations, while building a profitable business for Facebook, as well. Apple, meanwhile, has been slower to address the app-discovery problem, despite having acquired an app-discovery startup, Chomp, back in 2012. (Side note: It’s our understanding that Apple has finished integrating everything it planned to use from Chomp by now, like its card-style layout, for instance.)

Search is but one aspect of app discovery, and certainly a critical one for Apple to address, but when it comes to making it as easy to find things in the App Store as it is on the web, Apple’s biggest mobile competitor, Google, still has an advantage. In fact, Google is already moving to index the information in applications in order to link directly to apps from Google Search.

So today, while Apple’s AdWords alternative is just now being built, Google has been closing in on bringing deep linked native apps to the real thing.