Since its launch in early 2010, Quora’s question and answer site has built a catalog of intelligent, subjective views on the universe. But despite raising around $71 million, Quora is thought to have not yet to achieved breakout traffic and consistent mainstream usage. Some (not always accurate) third-party measurement services peg it at around 1 million monthly unique users. In May, the startup did say it grew 3X across all metrics, though.

Still, Quora has been doing everything it can to boost traction. It did a big redesign of its mobile apps and site that now bring in 40% of its traffic, launched a blogging platform, and began allowing its content to be embedded elsewhere. Verified Profiles is the latest push. Quora likely hopes that celebrities’ fan bases will flock to its site to consume exclusive content.

Being verified doesn’t give users any additional functionality besides a blue check mark next to their questions, answers, and comments. However, it could make other readers more confident they’re getting answers from real experts, not fakers. Quora says it isn’t taking requests to be verified right now and has a long list of people its hoping to get into the system.

Obama’s been looking for some growth too, specifically in usage of his Affordable Care Act. The deadline to get “Obamacare” coverage is March 31st, so he’s been doing a blitz of web promotion to sign up younger people in need of health insurance. 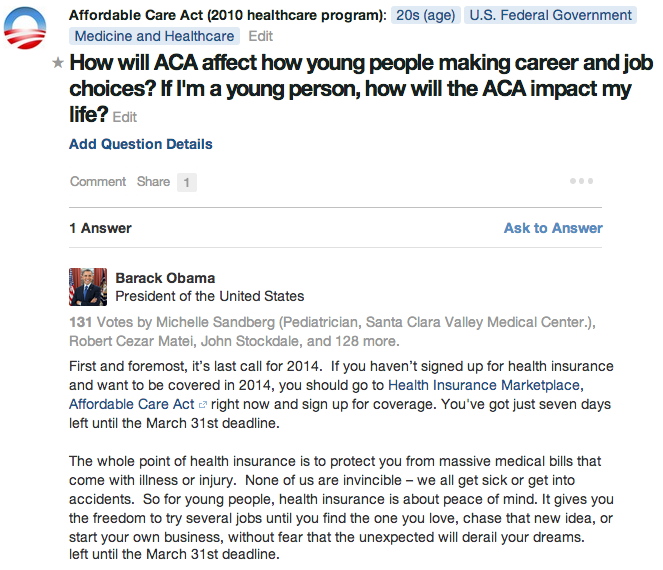 Most recently, Obama launched the #GeeksGetCovered campaign and did a spot on Zach Galifianakis’ comedy series Between Two Ferns plugging the ACA. Plus he tweets about it constantly. Some might say joining Quora four years late isn’t the tech-savviest move but what? Do you expect him to jump on Secret? And this isn’t his first time in the Internet hot seat. Obama did a Reddit Ask Me Anything (as seen in the photo above) last year.

Quora tells me that while Obama might not type in responses himself, they aren’t just copied and pasted from Whitehouse.gov. These answers are straight from the POTUS’ mouth.

Here’s a linked list of some public figures in Quora’s first round of verified profiles: