Oculus didn’t invent virtual reality — but they sure as hell made people care about it again.

As of this week, however, they no longer stand alone in their arena. Sony has decided they want to play the VR game too — and they’ve got at least one huge, not-so-obvious advantage.

Before we dive in, I must admit: I’m naturally inclined to root for Oculus here. If we’re considering this some sort of “battle”, Oculus is now something of an underdog. They took the initiative to move into a market that had become something of a joke/sci-fi pipedream in the decades prior, and managed to convince titans of industry to have their back. They’re doing something incredible. But even as a self-admitted fanboy, I’m real enough to see the faults.

Now, Oculus has a lot of things going for themselves. As the team largely responsible for the gaming world’s renewed interest in VR, they’ve managed to dominate the discussion for over a year. They got in early, blew up fast, and have some big, big names on their side. They’ve got tens of thousands of developers tinkering with their prototype headset — something that’ll be very hard for Sony to match, especially if they try to keep development/usage of their headset locked to just the PS4. For now, at least, most who think “virtual reality” immediately think “Oculus” — and as long as that’s the case, Oculus is the bar.

But they’ve got one big weakness: their headset is only half of the hardware equation.

You see, when it comes to virtual reality, the things we generally use for controlling a video game character or navigating an interface just don’t cut it. We’ve said it; others have said it; even Oculus founder Palmer Luckey has said it: input is VR’s biggest hurdle.

The ol’ keyboard and mouse? Even as someone who hasn’t needed to look at the keyboard to type since he was rockin’ velcro shoes and who pounds on keys all day, every day, I can admit: once you’ve got that headset on and all sense of relative space is gone, finding the right keys is awful, jarring, and wrecks the very sense of immersion that makes a VR headset worthwhile.

Gesture sensors? Perhaps in the future — but for now, things like the Kinect are just no where near good enough to be anything but frustrating.

Those crazy run-in-place treadmills? Heh. Okay. Good luck with that.

That leaves us with controllers.

That’s a lot of different things to have to consider, each widely different in their usage and implementation.

Which ones, as a developer, do you spend your time coding in support for?

Which ones, as a gamer (or the parent of a gamer, or someone just looking to dabble with this whole VR thing), do you spend your money on? The early adopter crowd may be happy to buy any-and-all of it — but when most people buy a $350 accessory, they don’t want to have to figure out which other expensive accessories they need to buy. 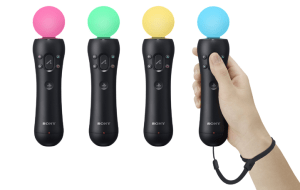 With Sony’s VR headset, there’s only one real option: Sony’s own Move controllers. Yep. Those goofy-ass, glowy wizard wands Sony started playing with a generation ago? Surprise! They’re actually really, really good for virtual reality input. Developers are free to use the console’s included Dualshock controller if it better fits their gameplay — but if they’re going for a deeper sense of immersion, bam: the Move is there.

We can compare specs and babble on about fields-of-view all day — but in the end, the kit that sells best will be the one that offers a complete, plug-and-play solution. Without Oculus not offering a base controller of their own, Sony has suddenly made the Oculus Rift seem incomplete.

Maybe Oculus is working on a solution of their own. If they are, they’ve kept it hush — and they certainly haven’t prepped developers for it. More likely, they’ll let the market, the developers, and the players spend this first generation working out what the best solution might be, then perhaps embrace that in an official capacity further down the road.

Whatever the case, the next few years are going to be a blast. Bumpy as hell for everyone involved, perhaps, but still a blast.