When it comes to cyberbullying in his anonyous sharing app, Secret co-founder claimed “We don’t see very much of that, if any” when we spoke on stage at SXSW. Secret’s users might disagree. Thankfully, through these highlights from our fireside chat, you can see Byttow acknowledge the darker side of anonymity. He reveals Secret is considering an 17+ age limit and other barriers to bullying.

Now just seven weeks old, Secret and the opportunities it creates for spreading hate have become controversial issues in Silicon Valley. Without names attached, people are free to insult and troll as they please. Posts criticizing/defaming public figures in tech including founders and investors are not uncommon, and were especially prevalent in its first days on iOS. Discussions of the ethics of anonymity heated up after Secret raised $8.4 million in a round including Garry Tan’s Initialized, Google Ventures, and other prominent funders.

Marc Andreessen tweet-questioned whether it was ethical to build or fund systems that “designed to encourage negative behavior, tearing people down, making fellow souls sad.” Others like Hunter Walk suggested apps should be judged on their potential to do good, not their worst use cases. 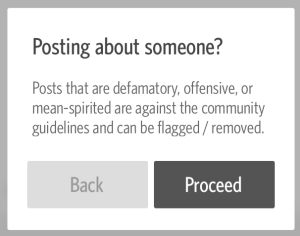 Early in the talk, Byttow said his company would rely on its userbase to set norms and handle most moderation. But by the end, he clarified that Secret does take a firm stance against abuse and will step in and remove content when necessary.

Secret had already begun to take productized steps towards combatting bullying by the time we took Byttow and I took the stage at SXSW on March 8th. When users try to post something that includes a proper name, Secret pops up a dialog explaining that defamatory and mean posts are against its community guidelines and may be flagged or removed. While Byttow dodged whether company names are similarly protected, he reiterated that when it comes to humans, “posting about someone else and using real names is obviously against our guidelines”.

In our talk, Byttow says these types of post are absolutely in. Byttow says that Secret is naturally better protected from cyberbullying because unlike Whisper, PostSecret, or Ask.fm, Secret isn’t a public feed where anyone can post or reply. On Secret, you only get posts from your community or that your community already interacted with. Byttow emphasized that the Secret users often share calls for help, and the community frequently rallies to support them.

The company is seeking other ways to minimize abuse. Byttow says that limiting Secret to people age 17 and over is “something we’re talking about for sure”. It’s also considering a direct way for people to report not just objectionable posts but ones that defame them personally. And in a case where a user is depressed — no matter where those feelings came from — Byttow says Secret’s next update will pop up a link to suicide prevention resources if their posts mentions suicidal thoughts. He also said the team is interested in using its funding to grow its moderation team beyond the 1.5 people who currently moderate all of Secret’s content. 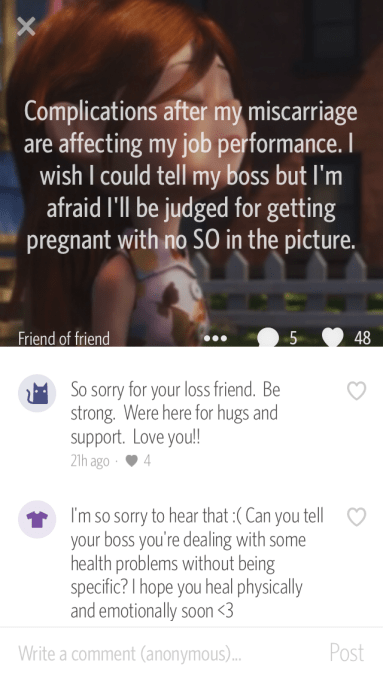 It’s reassuring to see that Secret is increasing its focus on fostering positive community. While the app has big potential to out bad actors and create honest forums for criticism, Secret threads can devolve into name calling and unconstructive hate. Getting its policies hammered out now is critical as Secret is poised to expand. Byttow says he hopes to launch internationally in one to two months. Secret is also working on an Android version and just hired Twitter’s VP of Analytics and Android lead Sara Haider to head up the effort. Finally, Byttow hopes to build an API for Secret, turning it into a platform.

But unlike most startups that can just push a minimum viable product, it could be dangerous for an anonymous app like Secret to expand with a minimum viable community policy. It needs concrete rules established for how to deal with content in the grey area between bullying and freedom of expression. Until the kinks are worked out of its policy, traction amongst merciless high school students or in languages its team can’t moderate could lead to depression or violence. Yet if Secret can find a way to keep discussion civil but not sterile, it could become a powerful outlet for what we’re scared to say.