From solar-powered electronic toilets to a prototype that helps recharge mobile phones from urine, and another one that could potentially offer advertising slots while pooping among several revenue generating opportunities, the ideas showcased at “Reinvent the toilet fair” in New Delhi were not short on lofty ambitions: in fact some of them can be best described as “the moonshots for solving the global sanitation crisis”.

Indeed, as the World Banks estimates, the annual global cost of poor sanitation is around $260 billion, of which India accounts for nearly $54 billion. Add to that some 2.5 billion people in the world who have no access to modern sanitation, toilets, and the problem is clearly in need of some moonshots. The cost of poor sanitation is not just money, but precious lives too if you consider that over 1.5 million kids die every year because of diarrhea — a disease originating from un-sanitised toilets.

Here are some of the ideas joining the list of 16 organization already part of the toilet challenge announced by the Gates Foundation in 2011: 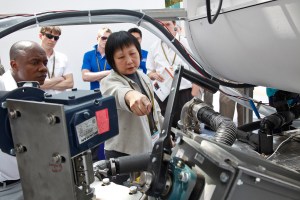 Among ideas demonstrated at the toilet tech fair, the Bristol Robotics Laboratory demoed a pilot that generates electricity from urine to power up a mobile phone. Another idea came from the University of Colorado Boulder, which has developed a prototype, which uses solar energy to transform both fecal material and urine into disinfected, commercially viable end products, the foundation said.

Since 2011, when the toilet challenge was launched by the foundation, some 16 teams have won grants to develop the next-gen toilets. These include a toilet system that uses microwave to convert human waste into electricity and a solar-powered toilet that separates liquids from solids and converts them into biochar.

For Bill Gates, the richest man on this planet, reinventing toilets is nothing short of eradicating Polio in terms of scale and complexity of the challenge. Gates has always believed in using technology to tackle the world’s biggest and most complex of challenges (mostly basic needs) without getting into “connecting the next billion” kind of goals. In fact, as he mentioned here in this Businessweek interview, there are more important problems to be solved than working on providing the Internet access to all, especially for low-income population.

“When you’re dying of malaria, I suppose you’ll look up and see that balloon, and I’m not sure how it’ll help you,” Gates had said in the Businessweek interview.

Use of technology to solve real world problems in the developing world is nothing new. Several attempts have been made to tackle the challenges of education, computer literacy and speedy Internet access. Developing the next-generation toilets may not be as fancy as the One Laptop Per Child mission for instance, but it does address a very basic and long-ignored problem that’s now become too massive to be solved by just one government. As this AP story noted, India has more than 640 million people defecating in the open and producing a stunning 72,000 tons of human waste each day.

To be sure, identifying innovative ideas and technologies that help the world reinvent toilets is not the biggest challenge for Gates and his team — it’s going to be more about providing affordable and sustainable solutions that do not have to depend on annual grants and beg users to embrace them. For its part, the Gates Foundation is betting on solutions that cost less than 5 cents per user per day and are aspirational in terms of design and ease-of-use, not just for the developing world, but also the developed nations.