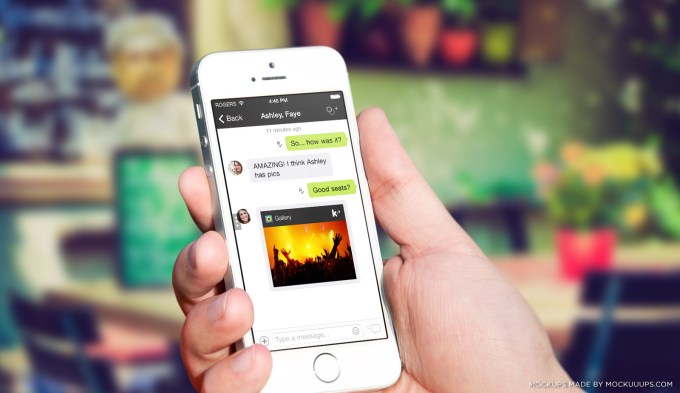 Editor’s note: Ted Livingston is the Founder and CEO of Kik, a mobile-first company with over 120 million registered users all over the world. Ted started working in mobile in 2007, while he was still studying at the University of Waterloo.

I was driving to a meeting in San Francisco when I got the message: “Facebook to buy WhatsApp for $19 billion.” I pulled over and watched as messages started to stream in. Everyone had the same question: Is Facebook crazy? As the CEO of the only smartphone messenger more popular than WhatsApp in the U.S., I gave them all the same answer: “No.” In fact, we had expected something like this for quite some time. And as we’ve now seen with Tango’s $280 million round, led by China’s Alibaba Group, interest in this space clearly isn’t going away anytime soon.

Messaging is a complex topic. It’s also one of the most misunderstood sectors in tech today. What’s the difference between WhatsApp and GChat? Why not just use SMS? Why did Facebook need to buy another messaging app just three years after it had bought Beluga? At the same time, however, messaging promises to be one of the highest-stakes battles in mobile, similar to what search was to the web or what productivity software was to the PC.

So what does messaging mean to mobile?

It’s a question we at Kik have been thinking about for a long time. In fact, given that we launched in 2010, we’ve probably been thinking about it more than almost anyone else. Now, thanks to Mark Zuckerberg’s latest purchase, the question seems to be on everyone’s mind. So I thought I’d share with you what I’ve learned over the years. Grab a coffee, because this might take some time.

Advent of the mobile messenger

This story begins in 2007, when I was working at BlackBerry as one of more than a thousand interns hired each term. The iPhone hadn’t launched yet, and data plans were so expensive that only Wall Street bankers could afford them. At RIM, however, we were all given BlackBerrys with full data plans. We used BBM like crazy. Thanks to MSN Messenger, we were already used to instant messaging – but somehow this was different. It was more immediate, more intimate.

With MSN, you’d always get people who would turn off their computers or leave them at their desks. But now the computer was always with you, always on, and always connected. For the first time, there was no such thing as offline.

Apps such as MSN, Facebook Messenger, and Skype have added mobile access over the years, but their desktop legacies live on: The “offline” setting is always a looming option. With WhatsApp, Kik or even SMS, on the other hand, the messaging communities are tied to the phones. By default, then, there is no such thing as offline – there’s only online, all the time.

So if you’re running five minutes late to meet your friend for coffee, you don’t send them a GChat or a message through Skype. You send them a text. Why? Because you want to maximize the chance they get your message. Only a mobile-only community guarantees everyone will be online, all the time.

If BBM was the first mobile messenger, WhatsApp was the second. It was 2009 and I had just left RIM to build a “Spotify for BlackBerry.” We planned to plug it into BBM to facilitate sharing. But towards the end of 2009, we realized the iPhone was actually going to be a thing, and that our music app needed to be on both BlackBerry and iPhone.

At about the same time, WhatsApp took off. It was basically BBM for iPhone users. Then it turned out they were planning to launch on BlackBerry as well. It was a killer idea. We went to RIM and asked them to launch BBM on iPhone. Not only did we need it for our music app, but we also thought it was the only way to compete with WhatsApp. RIM, however, needed BBM to sell BlackBerrys and chose not to take it cross-platform. We decided to take matters into our own hands and launch our own cross-platform messenger.

Fast forward four years and today the world is a very different place, with thousands of ways to message on a mobile phone. But when it comes to smartphone messengers, there are really only five messengers left in play: WhatsApp, WeChat, Line, Kakao and Kik. Yes, there are voice apps like Tango and Viber, as well photo apps like Instagram and Snapchat, but when it comes to that base utility of saying “Be there in five,” these are the ones that matter.

These five apps are quite similar, and only differentiate on one of three vectors: identity, region and platform.

For me, the first mobile messenger was BBM, but for most people it was SMS – and SMS worked well. It was mobile only and pre-installed on every phone. The key question for companies in the messaging space was: How do you take users away from SMS? The most obvious answer: make it free.

It’s easy for people in the U.S. to underestimate just how big a deal “free” is, because for most of us SMS is already free. Why would I use WhatsApp when I can just text? Because in most other countries around the world, texting is expensive.

That’s why WhatsApp was compelling: it was SMS, but it cost nothing. There was just one catch: your friends needed to be on WhatsApp, as well.

As a result, WhatsApp spread like crazy. In Asia, some companies reacted quickly and were able to compete. In China, Tencent launched WeChat; in Japan, Naver (actually a Korean company) launched Line; and Kakao sprung up as a startup in South Korea to launch KakaoTalk. For the most part, though, WhatsApp consumed the world. Except the U.S.

Aside from not being free, SMS has another problem: you can’t block people. For most people that’s okay. But there are times when you would like people who encounter you on Instagram, Tumblr, or SoundCloud to get in touch with you privately. Posting your phone number on such services is out of the question, because then you open yourself up to all sorts of spam and calls from weirdoes. Once that happens, the only way to stop the unwanted contact is to get a new number.

We chose to base Kik accounts on usernames, so you don’t have to hand out your phone number. As a result, we’re now seeing people share their Kik usernames to facilitate connections across a variety of services, including social apps, gaming apps and fitness apps.

The companies behind some of these other apps have seen all this activity and tried to build their own messaging right into the product. Take, for instance, Instagram Direct or Twitter’s Direct Messages. So far, those moves haven’t really worked out. People don’t want a messenger for each app they use – they want one messenger for all the apps they use.

Will consumers ever want more?

I remember being at RIM when they had a simple, singular vision for Blackberry: email on your phone. That was it. And it worked for a while. BlackBerry grew faster than everyone else and became bigger than everyone else. When the iPhone came out, we all laughed.

“Look at how bad the battery is!”

“Look how slow the email is!”

“All those apps! Who even wants apps? They just get in the way of email.”

WhatsApp feels to be in a similar place right now. The company’s simple “SMS but free” proposition is lighting the world on fire, but at some point will consumers find that offering mundane? Will they start to ask: “What else can I do with SMS?” We’re about to find out.

Each of the four remaining messengers has a beachhead that WhatsApp can’t touch. Line has Japan. KakaoTalk has South Korea. WeChat has China. Kik has cross-app chat. So none of us are going away. But we each want more than that. We’re all hungry to win, hungry to find a way to take users away from WhatsApp. And each of us has settled on the same way to do it: by building a platform.

A platform lets you maintain simplicity for people who only want messaging, while providing for those who want a little something more. Do you just want to chat with your friends? Okay, just do that. Oh, you want to play a game with your friends? Sure, try this. Want to shop for shoes with your friends now? How about this…

Platforms let us maintain the simplicity of a core messenger while also creating differentiation. On Kik, you can chat with your friends, play Words with Friends, and listen to music with them too. On KakaoTalk, you can sell digital items. On Line, you’ll soon be able to create and sell your own stickers. Using WeChat in China, you can pay for taxis and coffees right from the app.

Once you add developers into the mix, an entirely new computing ecosystem will develop. Thanks to the enormous spread of smartphones and mobile Internet connections — we’re looking at 5 billion mobile phone users by 2017 — it’s an ecosystem that could surpass anything we’ve seen so far, including Windows and Facebook. This is where “messaging apps” are heading.

This platform play has long been the game plan for messengers like Kik whose platform is, uniquely, built in HTML5. We all started off as “SMS but free,” but that meme is fast becoming “SMS but more.” We’ve learned from BlackBerry taking too long to respond to the iPhone that, if the big shift does happen again, for WhatsApp it may well be too late.

We always knew messaging would be a valuable space, but somehow a $19 billion acquisition has made that all the more real. From here on out, there are only two questions that matter.

If the answer to the first question is “no,” then WhatsApp has likely already won.

If the answer to the first question is “yes,” then WhatsApp has likely already lost, and it will be up to the other four companies to fight it out.

Then you’re left with the second question, which is the more interesting, and more lucrative, one. WhatsApp doesn’t have an answer for question two, so the answer will have to come from somewhere else. For us at Kik, that’s the really exciting part. That’s the future of messaging.