Imagine you have a huge sign-up list for your yet-to-launch startups or you are a quickly growing company with 50 new sales leads coming in every day. Who are those people signing up for your product? How do you research those leads? In most cases, you have to spend at least a few minutes per sender figuring out who they are and what companies they work for. StackLead, a Y Combinator-backed company that is launching today, wants to take the hassle out of this by automating the customer research process.

The company was founded by MIT engineers Gordon Wintrob and Ted Tomlinson, who hit upon this idea when they were working on another startup. They found themselves spending a lot of time on researching leads and realized that this was likely a pain point for others, as well.

The service, Wintrob told me earlier this week, has been live for about six weeks now. It has grown about 150 percent every week and has already signed up a number of paying customers. 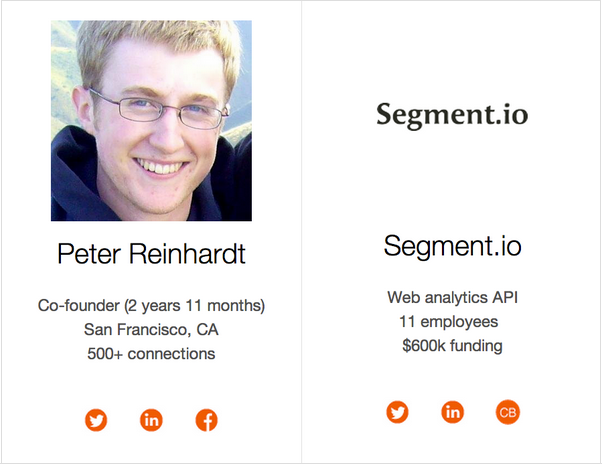 To find information about your prospects, StackLead uses a wide range of public sources, including Twitter, LinkedIn, CrunchBase, Facebook, company websites, press releases and job posting. Every time a request comes it, the lead processing engine goes out and looks for information about this person and compiles it for its report.

The hard part here, Wintrob pointed out, is that the algorithm has to be smart enough to merge different profiles. In my tests, it usually did a very good job, though as expected, it has some trouble with more generic names and email addresses like tips@beta.techcrunch.com.

Right now, the research mostly happens in real time. As the company grows, it expects its internal database will grow as well, so it won’t have to ping public sources for every lead.

StackLead offers a number of ways to access its data. You can simply forward an email from your inbox to them and the service will reply a minute or two later with its research. The company, however, has also built integrations with Salesforce, and offers an API so developers can easily integrate it into their existing applications.

What StackLead doesn’t offer, however, is a web-based dashboard. Wintrob says there hasn’t been a lot of demand for this.

With all of this data then, a company could easily prioritize its waitlist and give users in large enterprises priority access to a beta, for example, and sales teams can more easily find the kind of leads they know they can convert into paying users.

The service offers a free plan, which lets you research 50 new leads per month. Paid plans start at $19/month for 300 leads and also include the ability to handle spreadsheets as files or from Google Docs.

Many of the existing CRM solutions in the market offer similar social media tracking tools that are now built into their overall solutions. StackLead seems to be going into a slightly different direction, though, and is aiming less at traditional CRM solutions as at a budding market for customer intelligence that can be integrated into other kinds of platforms. The service, Wintrob says, also differentiates itself from other solutions by helping you use the data to prioritize your leads.

It’s worth noting that Y Combinator also incubated Rapportive a few years ago, which integrates similar reports right into your Gmail inbox. LinkedIn acquired Rapportive in 2012.