New Relic, maker of server and application-monitoring tools for developers, today announced what is probably the company’s biggest release since it launched in 2008. With New Relic Insights (formerly known under its codename Rubicon), the company is now using its platform to go beyond its traditional core features and is launching a real-time business analytics platform (or “software analytics,” as New Relic likes to call it).

In a way, this is similar to Google Analytics, but because New Relic’s software agent sits right in the application, Insights is application centric and not based on pageviews. This means you can get far more granular and in-depth data right from your applications (as well as the browser or a mobile device) than through a traditional analytics service. Users can, for example, figure out not just what pages users open, but which features they actually use. Is there a difference between what new and old users use, for example? Did a promotion that highlighted a specific feature actually work? Who are your most active users and what do they do on the service? Which coupon code did they use?

What’s ingenious about this launch is that currently New Relic users don’t have to do anything new. Insights uses the same agent New Relic users have already installed on their servers — and because of this, the company already pre-seeded its databases with about a month’s worth of data for all of its paying customers. Over the last month, the service collected a whopping 1 trillion events already. 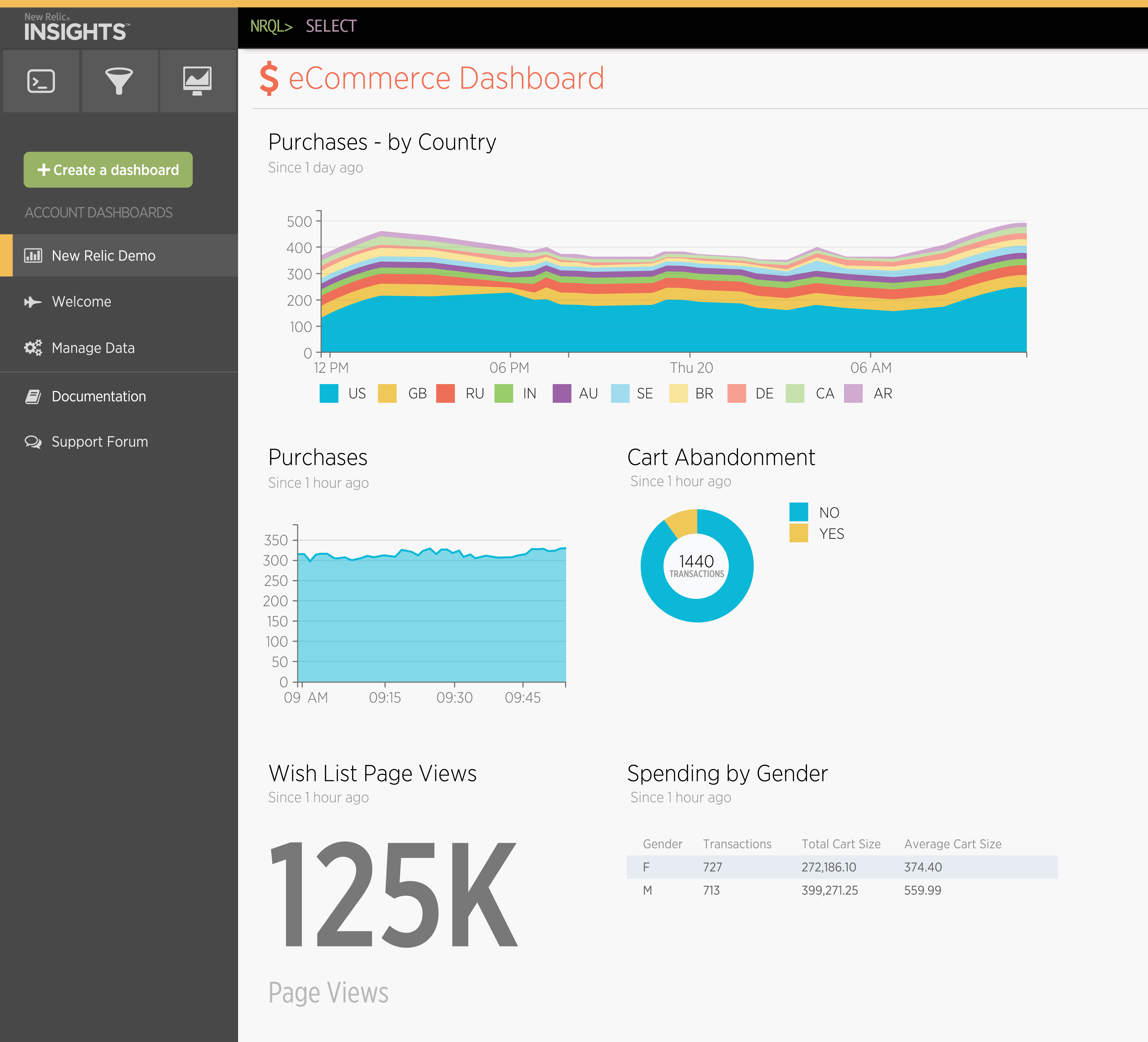 During the beta program, the service will be available for free and every paying customer gets 1 billion metrics stored per week.

You could get some of those answers through other means as well, but as New Relic CEO Lew Cirne told me earlier this month, the secret behind this tool is that it makes the data easy to access. Insights uses a SQL-like query language (the New Relic Query language, which should be pretty easy to learn for anybody who has ever looked at SQL) to access its massive database.

Users can run their text-based queries on New Relic’s site, but maybe more importantly, the service also offers a full API, so the data can easily flow into existing systems, as well. You can also just download the raw JSON right from the interface.

From New Relic’s interface, though, developers can also construct dashboards based on their queries. You just run the query, decide on how to visualize it and with a few clicks, it’s part of a new or existing dashboard.

Indeed, this database is what makes this system work. Cirne came up with the basic idea for it just over a year ago, and the company now considers it part of its core intellectual property. It’s custom designed for analyzing time-stamped events, and the company invested in a larger server cluster that makes heavy use of in-memory processing and SSDs to make it as fast as possible. The challenge here, Cirne noted, was to build something that worked well in a multi-tenant environment. Similar systems, he argues, are mostly meant for single customers. For the time your query runs (30 milliseconds or so in many cases), you get full access to the whole cluster for yourself.

The company expects Insights will go into general availability in the next three to four months, so this beta period may turn out to be pretty short.

Even if you don’t plan on using Insights, it’s still worth a look if you’re a New Relic user. The application-monitoring side of New Relic will likely use the same design as Insights very soon.