Wedding startups are a plenty, but fewer reach the milestone of a Series A round. So Raleigh, N.C.-based WedPics has something to celebrate. The company, an online and mobile platform that allows couples, the wedding party, and guests to share photos before, during and after the big day, now has $1 .5 million in Series A financing, led by local investor IDEA Fund Partners. Also participating in the round were Great Oaks Venture Capital, angel group TAP, Bob Young (co-founder of Red Hat), Jed Carlson (co-founder/President of ReverbNation), and several private angel investors.

The company originally spun out of the team’s prior efforts with a collaborative photo-sharing app for events called Deja Mi back in early 2011. But they soon realized that it made better sense to focus on a more specific use case. Weddings seemed like a natural fit. Almost everyone at these events carries a smartphone and takes photos, but organizing and sharing those photos after the fact was still a challenge.

WedPics changed that with its iOS, Android and online platforms, which allow everyone participating in the wedding preparations and attending the event and reception to easily share their photos with the couple tying the knot and the other guests. 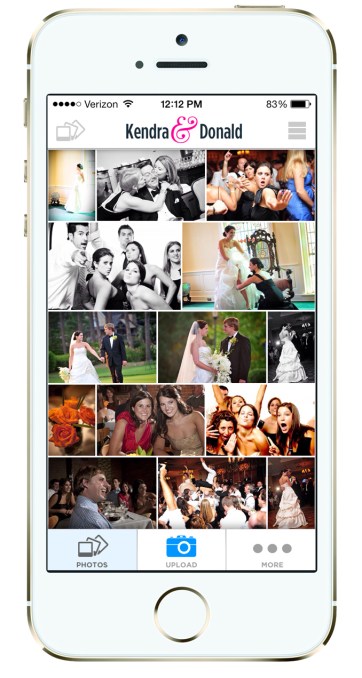 These days, couples are joining the WedPics platform around seven months prior to their wedding days and are beginning to share more than just the associated pre-wedding events like the rehearsal dinner or dress fittings, but also other preparations and wedding ideas, including photos of potential dresses, cakes, or venues, for example.

Having now completed its first full wedding season over the course of 2013, the company is planning to build out its product to support this use case and others that could make WedPics feel more like a social network, rather than just a photo-sharing utility.

Also in the works along these lines, are more options to share content back out to other social platforms (12 percent of content is shared to Facebook as is, Miller notes), as well as ways to identify the wedding party and guests in the system, with their names and titles (e.g. “best man,” “bridesmaid,” etc.).

To date, the company has been offering WedPics as a free product, with its main focus being user acquisition and growth. That’s something that Miller says they’ve been able to master via a combination of word-of-mouth referrals and targeted ads, the former which sees WedPics organically acquiring over 600 couples per day, with the latter at one point capturing 2,000 couples in a 24-hour period.

With the kinks around user acquisitions worked out, WedPics going forward is turning its attention to revenue. The company is partnering with other services like SimpleRegistry and wedding photographer aggregator SnapKnot to make for a richer experience, while also offering couples printed WedPics invitations they can include with their formal printed invites or place on tables. These sell for $19.99 to $49.99, for packs of invites ranging from 100 to 400 cards, says Miller, and they’re now converting over $1,000 per day.

With the additional funding, the company plans to make a couple of hires in terms of developers and marketing positions to flesh out its current team of 15, which also includes the WedPics other co-founders, Idan Koren and Andy Heymann. The remaining capital will be put toward other operational expenses and marketing.

The Series A round isn’t just a win for WedPics, adds Miller, it’s also a win for the Raleigh-Durham area itself. “We’re not typically known for having social apps thrive here, especially apps that are in the pre-rev stage, B2C, and certainly not in the wedding space,” he says.

WedPics competes with other startups, including Wedding Party, Appy Couple and more.