Over the years, riders of Uber and Lyft have griped about the dynamic pricing that kicks in whenever there are periods of high demand. But that’s partly because dynamic pricing only ever caused prices to go up. Today, on-demand ride-sharing startup Lyft is changing that with the launch of “Happy Hour,” a dynamic pricing model that lowers prices in times of low demand.

According to a Lyft blog post, Happy Hour will cut prices between 10 percent and 50 percent whenever there are drivers on the road but not a ton of people requesting rides. And, just as Lyft makes it obvious whenever there’s a fare multiplier when there’s high demand, it’ll prominently let users know that it’s Happy Hour.

For Lyft, the launch of more fully dynamic pricing could help it compete in an increasingly aggressive price war against Uber. 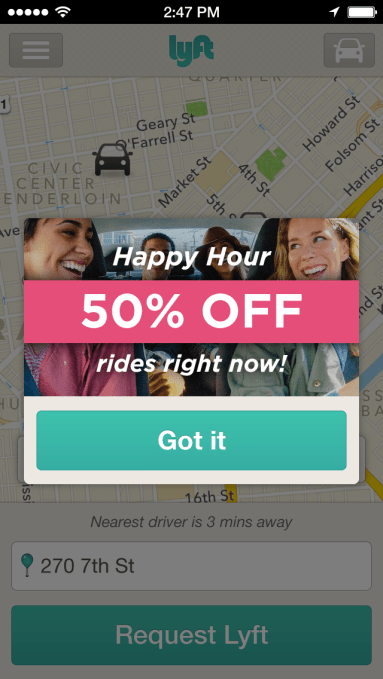 Earlier this year, Uber lowered fares in a number of markets in an effort to become the low-cost leader in transportation. But in many cases, the effect of surge pricing negates some of those increases at times when users need a ride the most — during rush hour, for instance.

Lyft has its own version of dynamic pricing called Prime Time Tips. But unlike Uber, it capped the amount that fares would increase based on demand at 200 percent. While that means Lyft isn’t price-gouging its passengers, it also occasionally means that sometimes there were no cars available on the platform.

Things also get tricky when trying to compare prices between different services. As pointed out in this Wall Street Journal piece, pricing and time can vary greatly among the services when competing against taxis or each other.

Happy Hour lowers fares for drivers, but Lyft is betting that lower prices could ultimately boost demand when things are usually slow. In its blog post, it notes that a driver who normally sees one ride per hour at $12 might see two or more at $9.

Lyft has raised a total of $82.5 million to date from investors that include Andreessen Horowitz, Founders Fund, Floodgate, Mayfield Fund, K9 Ventures, Ooga Labs, fbFund, and Keith Rabois. But it’s raising an additional $150 million, according to a filing with the Delaware Division of Corporations.