Though nearly 20% of adults in the U.S. have some form of hearing loss, there are very few options available for them in terms of hearing aids. They can either spend thousands of dollars on a prescription hearing aid or buy a cheap device with pre-settings for a couple hundred dollars. In fact, about 75% to 80% of adults with hearing loss don’t have devices, due in large part to lack of insurance.

iHear wants to give people with hearing loss an affordable device that they can easily customize at home with a Web-based hearing test. The startup’s goal is to ultimately make its hearing aids available for the 350 million people in the world who suffer from impaired hearing.

Created by a team led by biomedical engineer and entrepreneur Adnan Shennib, iHear is currently on Indiegogo and has raised about $24,000 of its $65,000 goal, with 21 days left to go. The hearing device, which includes a testing kit and access to iHear’s online diagnostic software, starts at $199.

The hearing device has started committing to suppliers and manufacturers and is on-schedule to meet iHear’s target ship date in August, says Shennib. The device has also filed for FDA approval and is seeking coverage from insurance providers. 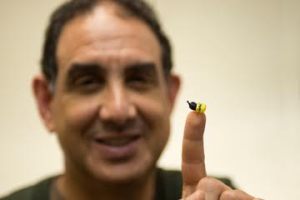 For every device it sells, iHear will donate one to an economically disadvantaged person through its non-profit partners. Shennib says iHear’s donation program will focus on countries where hearing aid penetration is especially low due to high prices and limited distribution, like China.

Shennib wants users to think of iHear’s functionality as being similar to a smartphone because you can customize it by downloading new software. iHear will keep releasing new features and settings based on user feedback. Each device can currently hold up to four settings, which wearers can select using a remote control. 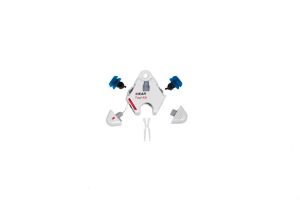 To set up iHear, users first connect their hearing aid to a computer with a USB device. Then they use iHear’s online diagnostic tools to calibrate it. Settings for different environments can be programmed into each device and adjusted whenever the wearer wants.

As an incentive for people to support iHear’s Indiegogo campaign even if they aren’t hearing impaired, the startup is offering high fidelity, noise-canceling headphones as a perk for contributions of $29 or more. The headphones were originally developed for use with its online hearing test.

Despite his success in getting devices to the market, Shennib was frustrated that they were inaccessible to many hearing impaired people.

“What we discovered is that the advanced technology we developed really ends up being a luxury item for most users. So we’ve created iHear as more of a mission than a company to reach out to those who can’t afford hearing solutions,” he says.